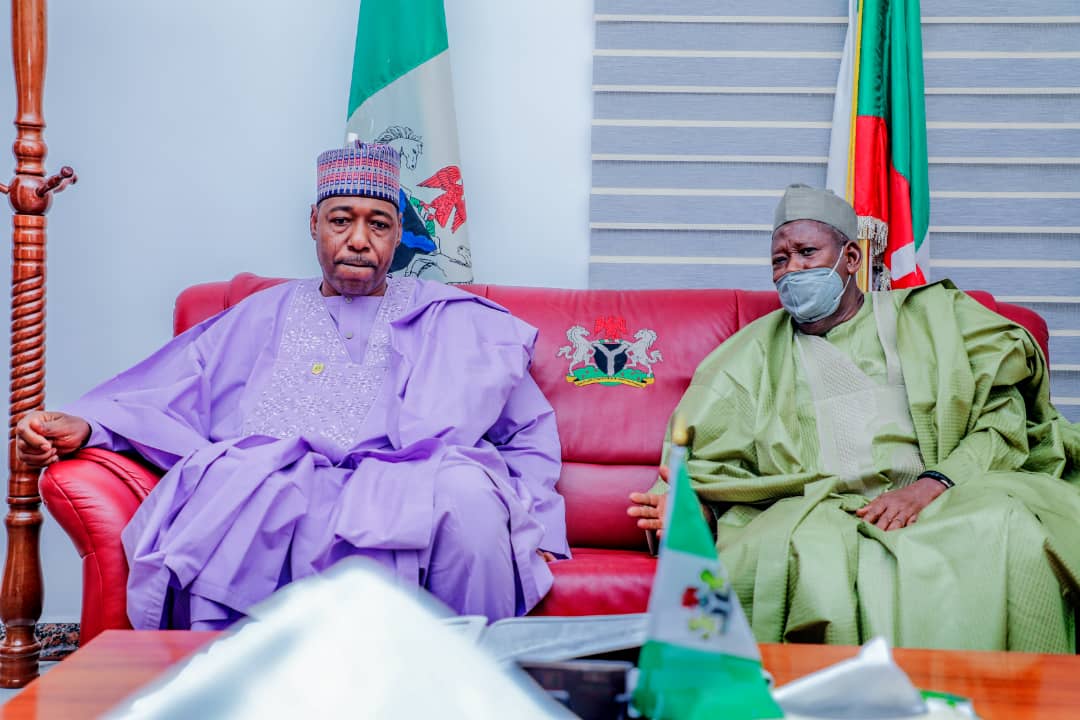 Governor Abdullahi Umar Ganduje of Kano state has led powerful delegation to Borno state where he commiserated and condoled with the government and people of the state over the recent tragedy inflicted on farmers of Zabarmari town, with death casualties.

A statement signed by the Chief Press Secretary to the Governor of Kano State, Abba Anwar said the Ganduje and his entourage visited Government House, Maiduguri, Wednesday, where he met with the Governor Prof. Babagana Zulum and members of the state Executive Council, alongside other top government functionaries.

Ganduje said: “We are here with this powerful team from Kano state to commiserate and condole with the government and people of Borno state over this tragedy. It is therefore important to note that tragedy on the people of Borno is a tragedy on all of us.”

He further stated that, “With concerted effort of both state and federal governments, this issue of insecurity will be squarely addressed. And we are working towards that by the Grace of the Almighty Allah.”

When the news of the tragedy reached “…us,” the governor said, “…it sent shivers to our nerves. And we found it very hard to believe such heinous act meted out to the innocent farmers of Zabarmari village.”

“We are calling for synergy between our security agencies in an effort to fight all facets of insecurity challenging us,” he advised.

While reminding that, there was long standing relationship between Kano and Borno, he added that Kano, has always been in the forefront in sympathising with the people of Borno state during this tragic and trying time.

“Kano state government is presently taking full charge of some hundreds of Borno orphans who lost their parents and other relatives, during the hey days of insurgency. They are in Kano with us and we are taking good care of their education. They will continue to be with us for them to develop, under our good care,” he stated.

Sometime in the past, he revealed, “…some Ulamas (Islamic Clerics) and traditional rulers brought some palliatives to the IDPs here in Maiduguri. This tells you how close and brotherly we are with the people of Borno state.”

He paid similar visit to the Shehu of Borno Abubakar Ibn Umar Garbai El-Kanemi at his palace, where he commiserates and condoles with the Shehu on behalf of the government and people of Kano state.

Both the governor and the Shehu of Borno expressed their deep appreciation over the condolence visit by the Kano state governor and his entourage. And both prayed for continued sisterly relationship between the two states.