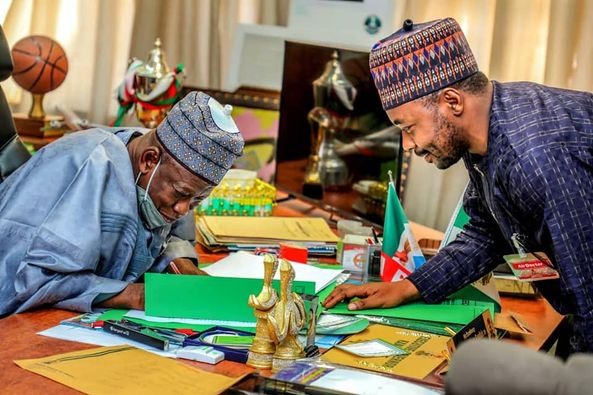 The document was signed in the presence of the Executive Chairman of the State Public Complaints and Anti-Corruption Commission (PCACC), Barrister Muhuyi Magaji Rimingado, Monday evening, at the governor’s office.

Chief Press Secretary to the Governor of Kano State, Abba Anwar said the document is aimed at designing strategy in the prevention of corruption, public engagement, ethical re-orientation, enforcement and sanctions, recovery and management of the proceeds of corruption and allied offences.

According to the statement, this singular effort showcases the zero tolerance to corruption through various initiatives and fulfilling the administration of governor Ganduje, who promised to provide a vibrant leadership with both legal and civil society background of proven integrity to ensure the credibility in all government affairs.

It could be recalled that, Kano state government joined the Open Government Partnership (OGP) in 2017 to ensure openness and transparency in government business. Which eventually resulted into signing of Executive Order by the governor.

To further display his seriousness and political will, Governor Ganduje established Transparency and Accountability Units (ACTUs) in all the Ministries, Departments and Agencies (MDAs), which are being jointly supervised by the state Anti-Graft Agency and the Office of the Head of Civil Service with support from development partners such as RoLAC.

Governor Ganduje challenged that, “All these initiatives are bone out of our desire to ensure transparency and accountability in governance.

This Anti-Corruption Strategy will also go a long way in showcasing more commitment of the present administration towards fight against corruption from all its ramification. As our administration is determined to keep the fight alive.”

While commending the development partners such as RoLAC, that stood by the state in its journey towards corruption-free society, he also hailed the state Anti-Corruption Commission’s committed leadership.

Encouraging that, “Our administration will continue to support the activities of this all-important Commission under Barrister Muhuyi Magaji Rimingado, uninterruptedly. While we will remain ever ready to work with all well-meaning initiatives that can move Kano forward.”

The document will be presented to the public on the International Anti-Corruption Day, 9th December, 2020.