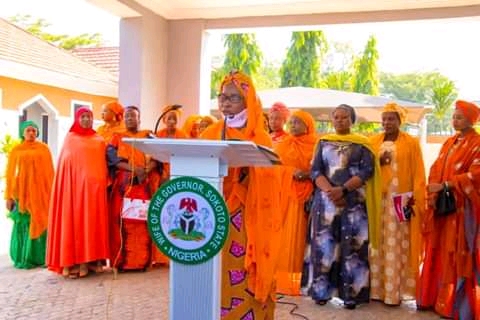 Wife of the Sokoto State Governor Hajiya Mariya Aminu Waziri Tambuwal in collaboration with spotlight initiatives and other Donor Agencies has commenced 16 days activism in commemoration of international day for the elimination of violence against women and girls.

Speaking during the occasion, the State Commissioner for Science and Technology and board member Mariya Tambuwal Development Initiative (MTDI), Hajiya Kulu Haruna says traditional rulers in the state are doing their best in protecting the rights of women and children.

She said District head of Gagi in Sokoto South local government, Alhaji Sani Umar Jabbi is one of the front-line traditional rulers that are committed to crusade against Gender based violence (GBV) in Sokoto state.

Earlier in his address, the Chief medical Director of Maryam Abacha Women and Children’s Hospital, Dr Bello Lawal said since the establishment of the hospital 23 years ago, more than 2000 women were operated for Vesicovaginal Fistula (VVF).

He said such patients were mostly divorced by their husbands because of the circumstances they found themselves.

According to him, the state government in collaboration with the hospital and other donor agencies grants support in form of skills acquisition training and working capitals and tools to start a new life.

He commended MTDI for empowering 100 women who were found to be either sexually harassed or divorced due to cases of VVF and other related sicknesses.

In her address, wife of the Governor Hajiya Mariya Aminu Waziri Tambuwal sponsor and overseer of the Pate program assured women in the state of her maximum support.

She urged women to continue to speak with one voice against Rape and Gender based violence.

Hajiya Mariya however appealed to women to speak out against evils of rape amongst women and girls.

The Governors wife during the occasion donated 20,000 naira each to 100 women who were in one way the other suffered or survived GBV in Sokoto state.