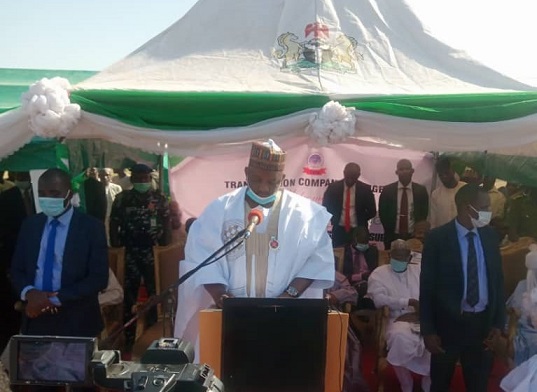 Speaking at the occasion the minister narrated that the contract for the project was initially awarded in 2012 with completion period of two years but abundant until the coming of present administration under President Bihari who promised to complete all such project across the country.

He said, today the project has come to reality and commissioned for the benefit of the people of Jigawa state.

The Minister stated that, the completion of the project is part of president Muhammad Buhari effort to ensure stable power supply for social and economic development in the nation.

“This project will enhance power supply in Jigawa state and would surly help in industrial development there by supporting job creation and poverty eradication in the state and country at large,” he said.

The minister then called on general public to take ownership of the project by giving it all protection it required and ensuring timely payment of their power bills.

In his speech, the Jigawa State Governor, Alhaji Muhammad Badaru Abubakar revealed that his government has already sign an agreement with some investors for the establishment of factories around the area.

He said seven LGAs of the state will benefit from the project and the state government has already give out contract for connecting the area with the new substation. The governor than commended Minister, Sale Mamman for his determination and tirelessly efforts in supporting president Muhammad Buhari administration to actualize its vision and mission on ensuring stable power supply in the country.