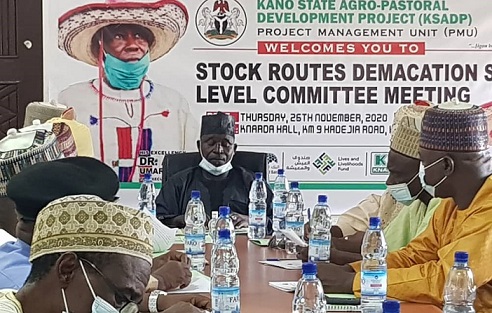 Kano state government has expressed deep concern over the encroachment and blockage of cattle stock routes across the state. A situation that often cause crisis involving herdsmen and farmers, leading to severe social, economic and food security challenges.

Accordingly, the government has expressed resolve to address the issue dispassionately, with a view of finding a sustainable solution.

“It is regrettable that famers and herdsmen have been engaged in clashes which have caused loss of lives and property. This is as a result of encroachment of the stock routes which serves as local and international passage for the herdsmen to reach water resources, grazing reserves or vaccination points”, the Chairman said.

Alh. Dan Isle, who is also the Managing Director, Kano State Agricultural and Rural Development Authority, KNARDA, added: “Unfortunately, many of the stock routes across Kano state have been encroached, so, one of our major tasks is to identify them and follow due process to ensure that they are retrieved, as a means of mitigation the recurrent conflicts”.

According to the Committee Chairman, “One of our major priorities now is the setting up of demarcation committees at the local government levels, with representation from the different actors concerned, to avert crisis arising from stock routes usage”.

“In this regard, we will leverage on the role of traditional community leaders in dispute resolution as well as public enlightenment”, he maintained, adding that the committee would also push for a legal framework to protect the stock routes, for lasting peace.

In his remarks, the State Project Coordinator, Kano Agro Pastoral Development Project, (KSADP), Alh. Ibrahim Garba Muhammad explained that the project has concluded plans to hire a consultant, to work with the Stock Route Committee, for identification, demarcation and gazettement for all stock routes in the state.

“The conflict mitigation activity is very strategic towards achieving the development objective of the KSADP. You cannot achieve development in agro pastoralism if there is no peace and stability”.

The Committee Secretary, Dr. Garba Saleh said some of the identified reasons for conflict between herdsmen and farmers are destruction of crops, harassment of herdsmen by host community youths, cattle theft and sale of cattle routes by local government authorities.

Others are lack of grazing land and disregard for local traditional authorities.