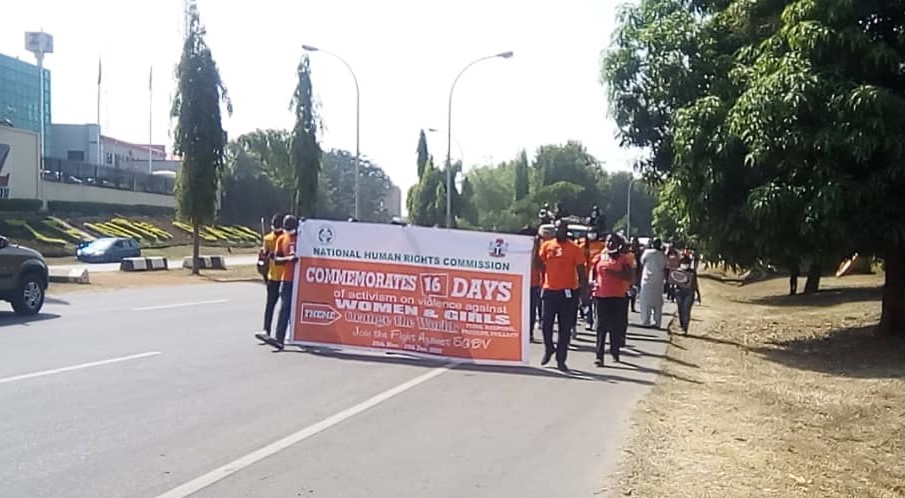 The Executive Secretary, National Human Rights Commission (NHRC), Tony Ojukwu, Esq officially launched the 16 Days of Activism on Violence Against Women in commemoration of the international day on elimination of violence against women and girls in Nigeria.

The event kicked off on Wednesday with a rally from the Commission ‘s Head Office at no 19, Aguiyi Ironsi street to the Federal Secretariat, Abuja.

According to Ojukwu, “In the past decades, despite the adoption of the Declaration of the Elimination of Violence Against Women by the UN General Assembly, it has been reported that violence against women and girls, whether physical, sexual, emotional or economics have spiked, notwithstanding concerted efforts at ensuring that laws and policies are put in place for their protection.”

In recent times, due to the COVID-19 pandemic and the lock-down that followed, the violence against women and girls was exacerbated. This was seen in the number of reports received from the public by the Commission, he recalled.

Adding that between March and June 2020, the Commission received and treated about 232 cases of various forms of violence against women and girls, including rape, sexual assaults, domestic violence, and other forms of inhuman treatments from the 36 States including FCT.

These reports he said indicated that there is no one state that is immune from the global violence against women, and girls.

He said: “Women and girls experience various forms of violence notwithstanding the provision of the 1999 Constitution of the Federal Republic of Nigeria, pledging to protect, promote and enforce the rights of all, including women and girls, the passage of the Violence Against Persons (Prohibition) Act, and the fact that Nigeria is party to the International Human Rights Treaties, including but not limited to CEDAW, the Maputo Protocol for the Protection of the Rights of Women in Africa.”

Ojukwu listed some forms of the violence experienced by women and girls to include rape, domestic violence, forced or early marriage, denial of marriage inheritance, physical and sexual assault and female genital mutilation, denial of family inheritance, harmful widowhood practices, among other human rights violations or abuses.

These violations are perpetrated with impunity as few violators, if any, are held accountable for the violations or abuse, he added.

He expressed concern that most survivors of SGBV fear to report to their families or law enforcement agencies because in most cases the alleged perpetrators are either families, neighbors, or persons who may engage in reprisals.

Other factors of fear include social stigmatization from the community members and pressures from the family to drop the charges, he added

Where the cases are reported to the law enforcement, they are reluctant to conduct the investigations or blame the survivors for the acts perpetrated against them, thus forcing survivors to “settle the matter out of court”, or ‘within families’. The perpetrator is not adequately punished for the crime.

Ojukwu said: “To show its commitment to ending the scourge, the Commission in collaboration with OSIWA, launched the UNSUB platform which connects survivors of SGBV to service providers and provides information on access to support system for survivors.”

In addition, the Commission in collaboration with the Swiss Embassy, UN – EU Spotlight Initiative, and OSIWA, established 24 hours call center to report SGBV and other human rights related cases.

And with the collaboration of the Office of the Vice President (OVP), the National Communication Commission (NCC), and UN Spotlight Initiative, the Commission was provided with toll-free call lines – 112 and 080006472428 – to encourage citizens to report SGBV cases.

During the 16 days of activism, Ojukwu said the Commission will engage in constructive advocacy with States to pass laws to outlaw harmful practices against women and girls, make policies that seek to protect women and girls and take a stand against SGBV.

The Commission is commemorating the 16 days of activism in the 36 States of the Federation, including the FCT. Each day is marked with activities ranging from advocacy, rally, conferences to the compilation of reports from the findings at the various meetings and visits conducted and a Communique is issued at the end of the events.

Violence against women and girls is a human rights violation that impacts on, and impedes progress in many areas of their lives, and the Country’s realisation of its obligations under the Sustainable Development Goals (SDG) and other international human rights treaties. Violence against women and girls aggravates poverty (SDG 1), hunger (SDG 2); health related issues (SDG 3); education (SDG 4); gender equality (SDG 5) and peace & security (SDG 16).

Each year, from 25 November to 10 December, the International Community marks the 16 days of activism on the Elimination of Violence against Women.

Congratulations to Women & Girls for your day. When is the day of Violence against Men & Boys for some Men & Boys are living in pains…