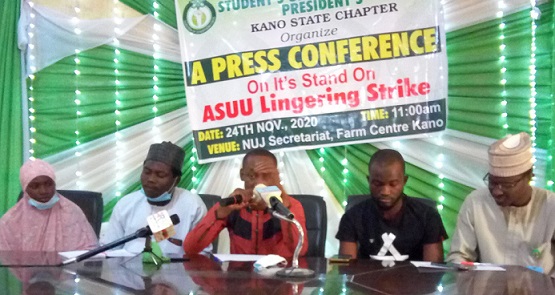 After a two-days round table discussions with stakeholders, the Coalition of 19 Northern States Students Union (CONSSU) has issued One-week Ultimatum to Federal Government and the Academic Staff Union of Universities (ASUU) to resolve their differences and call off strike, else, it will convert roads to classes.

Addressing newsmen on Tuesday at the Secretariat of Kano Council of Nigeria Union of Journalists (NUJ), the President, Student Union Government (SUG), Bayero University, Kano (BUK) Sadi Garba Sa’id said: “The coalition has unanimously agreed on the review of the ASUU demand.”

According to SUG President, the coalition resolved that in the event that the strike is called off, “it will not tolerate any form of hike in registration fees or induction of tuition fees.”

Also, “Government should waive registration fees because of the pandemic, which have seriously affected the economic status of the students and their parents or guardians.

“The National Youth Service Corps (NYSC) age limit should be revisited owing to the fact that the ASUU lingering strike may have crippled some students’ chances of participating in the scheme.

“The coalition condemns the alarming rate of rape and kidnapping cases across the country and therefore calls for prompt action from government.

“Government should introduce skill acquisition and internship programs for students in tertiary institutions across the country.

“There should be transparency in respect of federal and state scholarship schemes and it demands for quality eeducation in the country to also provide quality education in primary, secondary and tertiary institutions.”