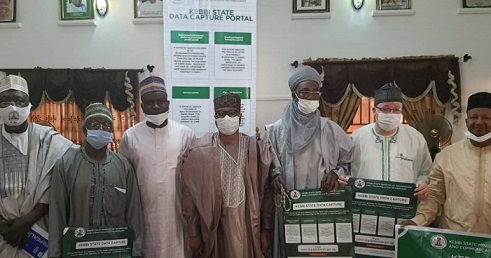 Kebbi State Government has launched a Data Capture Portal under the State Ministry for Information and Communication Technology (ICT) with a view to bolstering more employment opportunities for the teeming unemployed youths in the state.

The Kebbi State Governor, Abubakar Atiku Bagudu gave the approval for creation of the portal www.dcp.kebbistate.gov.ng

The portal was launched, so as to enable the people of the state especially youths to benefit from the myriad of interventions from federal government and other organizations.

Speaking during the event, the State ICT Commissioner, Alhaji Abdullahi Muhammdu Magoro, said: “The invaluable gesture was part of the unwavering commitment of Governor Atiku Bagudu to ensure the development of the people in all sectors.”

According to Magoro, the portal was launched in order to collate accurate data of all unemployed, educated and uneducated youths in the state; registration is free.

He said: “The state government was poised to having a robust and efficient database of all the unemployed youths in the state, hence, allow for better planning.

“The data will be captured so that, when the opportunities abound, more qualified youths from such interventions from the Federal Government and other Development Partners.

“We have already successfully conducted registration exercise like those of N-power and NYIF, with this portal, more youths will benefit.”

Magoro further explained that, arrangements were made to ensure that, even the uneducated people benefit from the registration exercise.

“We have made arrangements with some designated business centres in all local government areas and internet cafes for the uneducated youths to go and fill forms.

“Their data will then be uploaded into the portal, hence they can as well benefit when the opportunities for such jobs and interventions come,” the Kebbi ICT Commissioner, added.

He acknowledged the contributions of other partners like the CBN, NOA and NIMC, among others, saying that, such support had facilitated the successful take off of the portal.

Also speaking, the Wazirin Gwandu, Alhaji Abdullahi Umar, lauded the state government for the unparalleled gesture, saying that, it will greatly reduce unemployment in the state.

Wazirin Gwandu described the youths as the backbone of any society, as such, no efforts to provide employment opportunities for them is too much.

He urged the youths not to miss the chance provided by the state government, via the portal.

The Waziri lauded Governor Atiku Bagudu for his concern towards the upliftment of lives of the youths in the state, while also urging the Commissioner for ICT, Hon. Abdullahi Muhammdu Magoro, to reach out to beneficiaries in all nooks and crannies of the state for the scheme to be successful.

“I am happy to be part of this occasion in view of its importance to the target beneficiaries.

“I am also happy to hear that Kebbi State is the first state in Nigeria to come up with this free of charged registration” he added.

In their goodwill messages, the Commissioner for Animal Health, Husbandry and Fisheries, Hon Aminu Garba Dandiga while calling on youths to take advantage of the exercise, commended Bagudu for his commitment to ensuring that youths in the state were carried along in developmental issues.

The Commissioner for Local Government and Chieftaincy Affairs, Alhaji Hassan Shalla, encouraged youths to support the exercise by coming out enmass to register.

Similarly, the Permanent Secretary, Ministry for Budget and Economic Planning, Hajia Aishatu Usman, described the launching of the data portal as a land mark development for the state.

She stressed the importance of data in planning, emphasising that, the Ministry would not relent in the provision of adequate funds for youths and women development and empowerment.

The Representative of NOA, Abubakar Dansalma, appealed to the Government, the Media and the traditional rulers to intensify efforts in creating awareness and mobilisation of youths in the state.

On his part, the State Chairman of Nigerian Association of Small and Medium Enterprises (NASME), Alhaji Nura Bello, said the youths in the state never had it so good than now under the present leadership of governor Bagudu.

Adding that, the youths have benefited immensely from myriad of interventions from both the state and federal governments, while SMEs across the country have witnessed boom.

The State Coordinator of Kungiyar Tallafin Mata, Zara’u Ahmad, acknowledged the leadership of Governor Atiku Bagudu in emancipating the youths from unemployment and poverty, calling on them to fully utilize the opportunity.

“After commending the Kebbi State Governor, my call on the youths is to take up this opportunity, because, they are the agents of development, ” she said.

Highlights of the event include the commissioning of the Data Capture Portal by the Wazirin Gwandu, Alhaji Abdullahi Umar.

The Data Capture Portal for the state comprises data capture for graduates, skilled and unskilled youths, Small and Medium Enterprises, farmers and women in business.

We as professional bodies APBN kano chapter have been advocating on youth biometric data captured through designated agencies or commercial banks to ascertain what we have before planning and implementation of proposals
Human resources agriculture is what Europeans used to conquer before machine age
We can apply the same methodology to get the country out of all these social vices .
Irrespective of age gender qualifications
All states must adopt this data captured
Next is recruitment to farm all the youth to target operation feed Africa