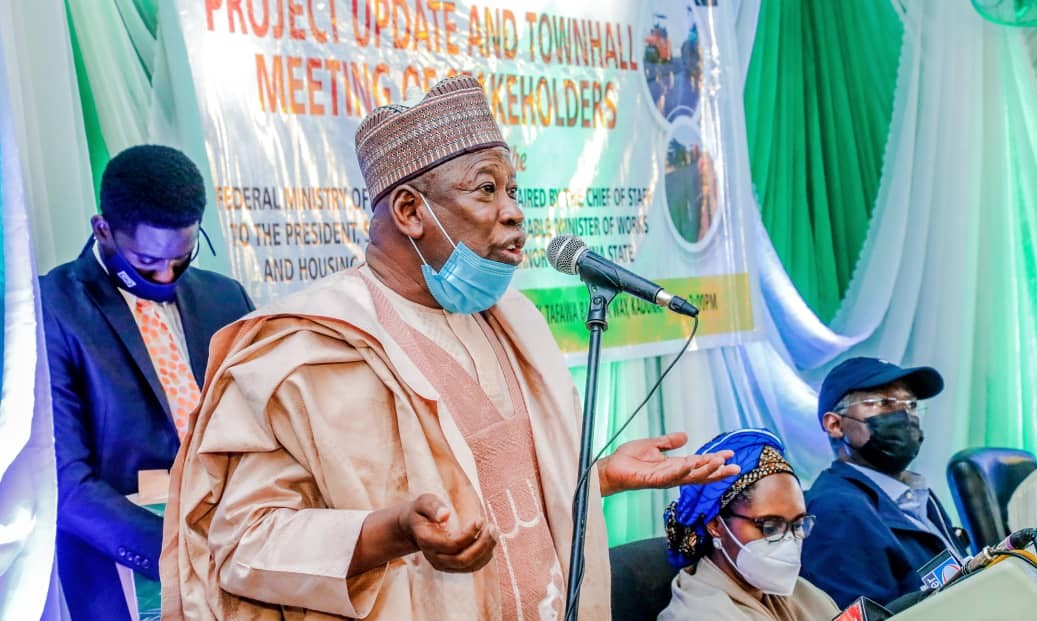 Concerned with the on-going rehabilitation of Kano-Zaria-Kaduna-Abuja dual carriageway, President Muhammadu Buhari sent a powerful delegation for an update on the project.

The delegation which include his Chief of Staff, Prof Ibrahim Gambari, with Ministers of Works and Finance, Babatunde Raji Fashola and Zainab Shamsuna Ahmed held a Project Update and Town Hall Meeting of Stakeholders with the Governor Dr Abdullahi Umar Ganduje at the Kaduna State University, Theatre, Thursday evening.

A statement by the Chief Press Secretary to the Governor of Kano State, Abba Anwar said Prof Gambari who represented the President disclosed that, “It was the special concern His Excellency, Mr President has, that mandated for a Monthly meeting of some selected cabinet members, who review some selected federal projects that are critical to national development.”

The Kaduna town hall meeting that brought together states that have direct link with the Kano-Zaria-Kaduna-Abuja expressway, was a brainchild of that Presidential initiative, according to the Chief of Staff to the President.

After assuring all stakeholders that the federal government was committed to finishing the all-important project, he corroborated with the submission of the Kano governor on ensuring the quality of the work.

According to the statement, Governor Ganduje insisted that, while calling on the immediate completion of the project, as amplified by many people during the meeting, he said “People should also insist on quality work.”

“Timely completion of the project is one thing and the quality of the work is another thing. So, people or stakeholders should at the same time see reason in demanding for quality work. Because if a project is not done properly well with quality, it won’t take many years intact,” he observed.

Ganduje appreciated that President Buhari sent that powerful delegation to see to themselves the level of progress, adding that “This shows how dear we are to his heart. We are using this platform to thank our President through his Chief of Staff.”

As a former Commissioner of Works in Kano, during the military era, governor Ganduje gave some technical explanations to the meeting about road construction and rehabilitation.

While appreciating the pace of the work from Kano end recently, he commended the new initiative of the Presidency which allows for a Monthly meeting to review federal projects across the 36 states and the federal capital territory, Abuja.

Great. this would bring prudence and efficiency. In governance n