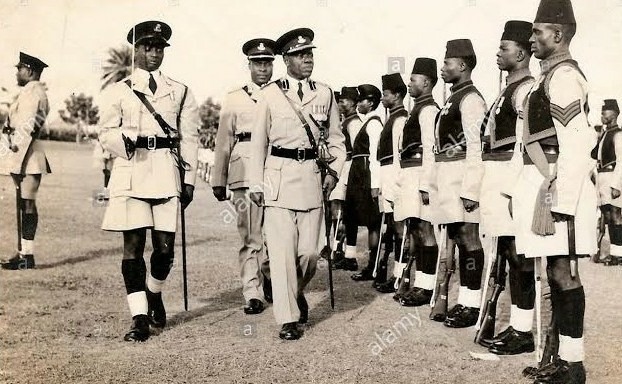 Nigeria’s collective national security and military establishment started in 1863. It was well financed by the Royal Niger Company. The gradual separation came with the Niger River Constabulary in 1888 at Lokoja. Then came the Niger Coast Constabulary in 1894 at Calabar and eventually the Lagos Police in 1896.

Sir John Hawley Glover was an officer under the command of Dr. William Balfour Baikie both of the Royal Navy. Glover was the Lagos governor from 1863 to 1874 and Baikie the British consul of what became the colonial contours of what eventually became Nigeria under Lord Lugard from 1857 to 1859;

“Glover formed the nucleus of present-day Nigerian Army and Police with 10 Hausa runaway slaves on 1 June 1863. The group was known as Glover’s Hausas or ‘Glover’s Forty Thieves’. Glover went to great lengths to develop bonds of personal loyalty with the Armed Hausas. He personally trained, commanded, and chose his successors, ensuring their loyalty.

In return for their loyalty, Glover rewarded his troops with land and dwellings. He raised their pay and provided them with smart uniforms that broadcast their status of free men and agents of the British colonial government.”

Dr. Baikie introduced the use of Quinine for the treatment of Malaria in our clime, authored; Observations on the Hausa and Fuifuide Languages printed in 1861 and previously in 1856; Narrative of an Exploring Voyage up the Rivers Kwora and Binue. He collected vocabularies of nearly fifty languages, and translated portions of the Holy Bible and prayer-book into Hausa and Arabic. His translation of the Psalms into Hausa was published by the Bible Society in 1881. More importantly he established Lokoja;

“After purchasing the site, and concluding a treaty with the Fula emir of Nupe, he proceeded to clear the ground, build houses, form enclosures and pave the way for a future city. In less than five years he had opened up the navigation of the Niger, made roads, and established a market to which the native produce was brought for sale and barter. His settlement grew to include representatives of almost all the tribes of West-Central Africa, and more than 2,000 traders visited the town in its first three years.”

Lest we forget as Ghanaian authorities harass and intimidate Nigerian traders;

“Glover was employed to repel incursions of the Ashantis. When the Third Anglo-Ashanti War broke out in September 1873 he landed at Cape Coast, and, after forming a small trustworthy force of Hausa, marched to Accra. His influence sufficed to gather a numerous native force.

In January 1874 Captain Glover was able to render some assistance in the taking of Kumasi, but it was at the head of a Hausa force.”

The Nigerian Police Force has always been segmented along regional lines each headed by a Commissioner reporting to an Inspector-General in Lagos. Chief Louis Orok Edet (1914-1979) became the first Nigerian IGP between 1964 and 1966. Back then every Commissioner had a network of Native Authority Police formations. The Nigerian Immigration Service, Correctional Services, Federal Road Safety Corps and Civil Defence were all carved out of police duties.

By 1966, onwards the Police became more centralized at the federal level. Under IBB it became Nigerian Police when Force was removed. The reason was obvious. If IGP Sunday Adewusi had had his way under President Shehu Shagari the military coup of December 31, 1983 would not have taken place. The rest as they say is now history as the Nigeria Police became systematically underfunded.

During the era of President Shagari, the monthly pay of a Constable was increased to N400 and personnel strength reached 152, 000. Now it is 375,000 with a huge chunk outsourced to VIPs, financial institutions, government assets, private company premises, traditional rulers and even celebrities.

The Glover’s Hausas were at the vanguard of dismantling slavery and the notorious slave trade across Nigeria particularly in defeating the Sokoto caliphate. It consisted of martial oriented tribes from all nooks and crannies of what later became Nigeria including from parts of present-day Niger, Tchad, Cameroon to as far as the Darfur region of Sudan.

Hausa therefore in Glover’s context was not an ethnicity but a Lingua Franca that is why an Ibadan Signals officer like Raji Rasaki would more than a hundred years later with ease ask in Lagos; “Who build dis gada?”

For the Nigerian Police to become more effective it has to be more decentralized and modernized. With a population of over 200 million our police apparatus has to be increasingly technological based. Crime prevention and solving value added with forensic and IT capacities.

Patrols have to include drones. Increased CCTV coverage is also imperative. All these are capital intensive. This means the cost of governance must drastically reduce in Nigeria. The Nigerian political class have become a major burden on the rest of the polity at expense of our collective security.

Warts and all, the police is your friend. If not call a thug when next you are in trouble!

Every society gets the kind of police it deserves. If we want better policing, we must better ourselves first!