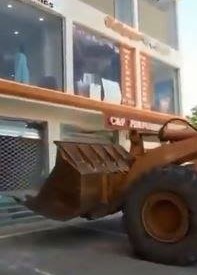 The recent demolition of a multiple storey shopping plaza at Wuse in Abuja was uncalled for. agreed the developer violated the building code and ignored official notifications; but why couldn’t FCDA approach a court of competent jurisdiction instead? who gains when a landed property is reduced to rubble? so what if an approved carpark is converted to shops?

Even the Aso Rock Villa is in violation of the approved Abuja master plan. while two wrongs do not make a right, a valid court order against the said developer would strengthen the rule of law and boost the financial coffers of government. I hope this action has no other undertones or hidden agenda.

Only last week or so a restaurant run by Layla Ali Othman was sealed by some Abuja Municipal officials while customers were still dining. likewise, the bulldozer in Wuse started operation while people were still inside the plaza. a court order sealing the premises should have come first!

In a period of economic downturn when businesses are suffocating and barely surviving impunity should not make things worst. Approaching the courts would ensure balanced enforcement of the law as all sides will receive fair hearing. my major concern is that jobs are always lost when government officials act without imagination.

Every design by an architect incorporates an element of functional flexibility as long as it does not compromise any structural integrity. For instance, a residential bedroom could be converted into a study. who says I can’t use an unoccupied boy’s quarters room in my house as a store? or even convert my generator room into a dog kennel if I install solar panels as an alternative power source? if I do any of these and the planning authorities think otherwise, we shall then meet in court.

The conversion of an approved carpark to more shops simply means more revenue for the developer which FCDA could effectively tax. in overall context more shops translate to more opportunities. all that have now been unfortunately lost.

I don’t know why some government officials behave as if they will not one day retire!

Ijaws join suit seeking the removal of South-East from Nigeria