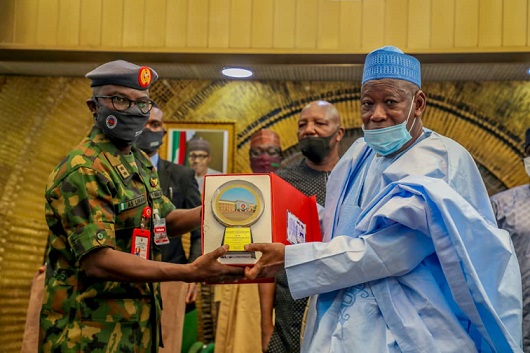 Senior Course 43 of the Armed Forces Command and Staff College, Jaji under the Team Lead, Commodore S.A. Akinwande with other senior military officers, Commandant of the College Air, Commodore Abubakar Sadiq Imam, paid a special visit to governor Abdullahi Umar Ganduje of Kano state, to study how the state flattened the curve of COVID-19 pandemic within a time frame.

A statement by the Chief Press Secretary to the Governor of Kano State, Abba Anwar quoted Commodore Akinwande saying “This visit will give the students the opportunity to study the activities of the state government in the fight against the pandemic. Which will broaden their knowledge and understanding of His Excellency’s effort.”

“Sir it is on record that the positive response by the state government under the able leadership of His Excellency was indeed able to flatten the curve. And subsequent giant recovery from the impact of the COVID-19 pandemic, within a short space of time. This is quite commendable,” the Team Lead impressed.

Adding further that, this singular effort by Ganduje administration, was what informed the choice of Kano state for the study tour. That could enable students draw possible lessons regarding management of the pandemic.

Which, according to him, “…at the end of the tour, students will return to the College with analysed data that was obtained during the tour. That could help in shaping the formulation of policies in that direction, for the betterment of the country at large.”

In his brief remarks, governor Ganduje appreciated the choice of Kano for the visit, for the participants of the Senior Course 43 from the College. Assuring that the efforts put during the heydays of the pandemic, would still be maintained.

“We appreciate you and your engagement towards generating the necessary manpower for the overall development of our dear nation. I also want use this opportunity to commend you for choosing the most appropriate theme of “COVID-19 and Socio-economic Development,” commended the governor.

He explained to them the Tripartite Strategy the state government employed in tackling the menace. These are, according to the governor “Preventive measure, Curative measure and Palliative measure.”

“Even before the emergence of the first index case in the state we took many measures that we termed as preventive measures against the pandemic. We prepared ourselves with Isolation Centres, we had health workers in place, we got in place many equipments that would be put to use, among many other things. That was the preventive aspect of it,” he reveals.

On the Curative front according to him “…the state government, after emergence of the first index case, we did our best to see that we had enough Isolation Centres and Testing Centres. We initially had only one Testing Centre at Aminu Kano Teaching Hospital. But as time passed, we could boast of 5 Testing Centres in the state.

Alhaji Aliko Dangote himself gave us a mobile Testing Centre. So also, Alhaji Abdussamad Isyaka Rabi’u of BUA Group of Companies contributed immensely, there were many other Centres we got from other sources.”

While on the Palliative stage, governor Ganduje said “We understood very clearly that, the pandemic came along with many hardships. As such we concluded that we needed to give out some palliatives to our people to cushion the effect of the pandemic.

We gave out palliatives in 3 different batches to the most vulnerable population of our state. We also got contributions from individuals and organisations. Alhaji Aminu Dantata, gave us Three Hundred Million Naira (N300m) among many others.”

On A Day Political Divisions Vanished Because of Governor Tambuwal