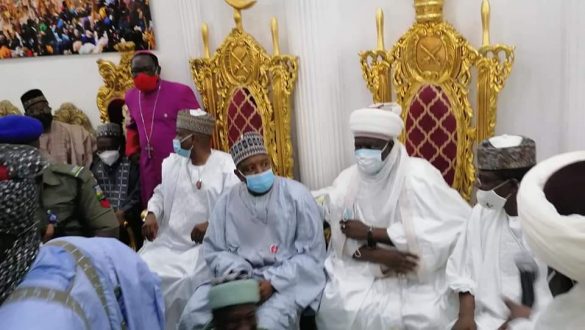 It was a beehive of activities at the Palace of Emir of Argungu, Alhaji Muhammdu Samaila Mera, as hundreds of friends and well-wishers of the groom and bride, thronged the Palace, amidst pomp and pageantry.

The elated and happy host, Kebbi State Governor, Senator Abubakar Atiku Bagudu, served as the Waliyyi for the bride, while the Minister for Justice and Attorney General of the federation, the head of Federal Government delegation, Abubakar Malami (SAN), served as the Wakil for the groom.

Upon the payment of Two hundred and Fifty Thousand Naira (N250,000), by the groom’s family to the family of the bride as dowry, the duo was hooked in a holy matrimony.

The Sultanate Council Sokoto was represented by the Waziri of Sokoto, Professor Sambo Wali Junaidu. Others were the royal father of the day HRH, the emir of Argungu, Alhaji Samaila Muhammdu Mera ( Sarkin Kabi) , the representative of the emir of Gwandu, Magajin Rafin Gwandu, Barrister Sambo Aliyu.

Islamic Scholars such as Sheik Bala Lau, the National Chairman of Izala Movement, the National Secretary, Sheikh Kabiru Gombe, Abubakar Giro Argungu, a top leader of the movement as well as renowned Clerics of the Tijjaniya Movement and other religious groups.

Others who graced the solemnisation of the holy matrimony include the Chief of Staff Government House, Birnin Kebbi, Alhaji Suleiman Muhammad Argungu (Jarman Kabi), SSG, Babale Umar Yauri as well as serving and retired military officers, the police and other paramilitary Services , the political class including the Kebbi State APC Chairman, Arc Bala Sani Kangiwa and the National Chairman of the PDP, Uche Secondus, bussiness tycoons such ad the Proprietor of Max Airline, Alhaji Dahiru Mangal and Alhaji Sahabi Lolo, Chairman of Lolo Rice Mill Kamba and other top Government functionaries from Kebbi Sokoto, Zamfara and several states .

In a similar development, the Kebbi State Governor Senator Abubakar Atiku Bagudu was also at the residence of Alhaji Haruna Dantoro, Shiyar Firshin Titin Boyi in Jega Local Government Area where he attended the wedding ceremony of the Daughter of late Aminu Musa Habib Jega, Former Speaker and Acting Governor of Kebbi State.