Menu
Home Opinion Adieu to a Patriot and Tyrant
Opinion 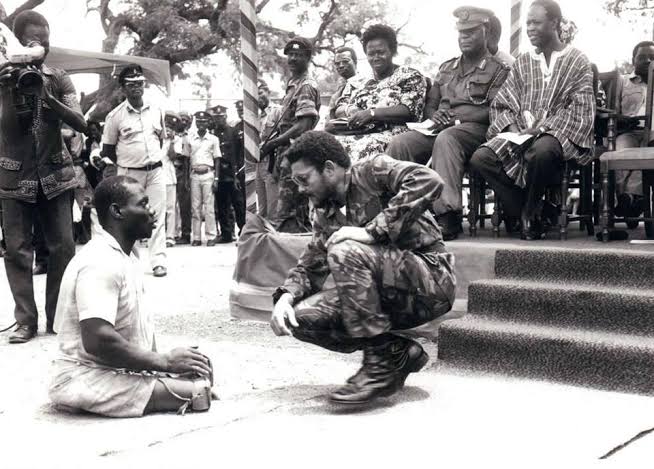 Agreed Kwame Nkrumah was the father of modern Ghana. John Jerry Rawlings is however the facilitator of contemporary Ghana. I doubt if that country would have got to where it is today without the intervention of Rawlings. As they say; “The tree of liberty must be refreshed from time to time with the blood of patriots and tyrants.”

JJ was a consummate patriot and benevolent tyrant. As a military dictator and civilian president, Rawlings always stooped low for the underprivileged like in the attached throwback picture at an official engagement in the Upper-West Region on September 28, 1987 when he spotted whom he described as the “most important guest around” The Head of State stopped mid speech and walked down the dais. It was quintessential JJ for you!

Interestingly, the maverick pilot and Flight Lieutenant never promoted himself beyond his designated rank from 1981 to 1992 that he served as Commander in Chief. He might be accused of many things. Official corruption is not one of them. He was integrity personified. While he had a common touch with the masses of Ghana, he was bloodily vindictive to his perceived enemies. He nevertheless had vision and was massively charismatic.

Straight as an arrow, he shunned luxury, conspicuous consumption and the primitive accumulation of wealth. He was not an openly religious man, he believed; “The test of religious belief is not in pious platitudes and cautious charity, but in positive and creative action.” Thanks, but no thanks to Rawlings, unlike Nigerians, Ghanaians don’t engage in any form of what can best be described as the “apropos of doubtful religiosity.”

As soon as he seized power, he lined up 3 previous Military Heads of State, Generals Akwasi Afrifa, Ignatius Acheampong, and Fred Akuffo executing them by firing squad. He did not spare anyone with unexplained income. In his own words he described his actions as; “a housecleaning exercise that seeks to purge the country of corrupt political and business leaders and recalibrate Ghana’s national moral compass.”

He purged the then political class in Ghana describing them as; “a pack of criminals who bled Ghana to the bone” JJ Rawlings vehemently vowed to “organize this country (Ghana) in such a way that nothing will be done, whether by God or the devil, without the consent and the authority of the people.”

Rawlings no doubt restored dignity to an impoverished Ghana. He was referred to as “Junior Jesus” by old timers and “Papa J” by the youth who were not even born when he was a military leader.

How did he pull it off with neither oil wealth nor Chinese loans?

He built an inclusive nation by personal example. Under him and beyond the citizens of that country are always Ghanaian first.

Last year or so, viral videos of him directing traffic in a gridlock surfaced. He looked awesome. Hate him or admire him he was one those personalities that can never be ignored. Was his tyrannical proclivity justified for the common good of Ghana? I think so because it laid the foundation of the relative peace and prosperity Ghana now enjoys compared to the insecurity wrecking Nigeria.

JJ Rawlings had an impeccable public service career. Bullets could not take him down – Coronavirus did, aged 73. He shall always be fondly remembered as the inspirational icon. He was truly a phenomenal leader. Bold, assertive, confident and bushwhacking.

He never hid behind the façade of Media Aides. His razor-sharp mind radiated in press interviews and impromptu engagements. He never left doubts about where he stood on any issue.

Nigeria might be the giant of Africa but Rawlings has made Ghana the pride of Africa. His compatriots trusted and believed in him. He never disappointed them for the 21 years he was in power.

I have so many friends, too numerous to mention here from Ghana that we have over the decades enjoyed endless Kelewele, Red-red, Banku and Kenkey dishes together in various joints of Sabongari, Kano.  Kindly accept my condolences on the recent demise of your beloved political hero.

Howaazat sir? As long as you fellow cricketers admit Nigerian Jollof is better and that you actually stole Waakye, Tuo Zaafi and Fufu from us.

Nigeria-Ghana relations has always had its ups and downs but we shall be, always be friends and neighbors. Akwaaba!

May JJ rest in peace!

Indeed a great Hero, His memories would always be there… Rest in peace