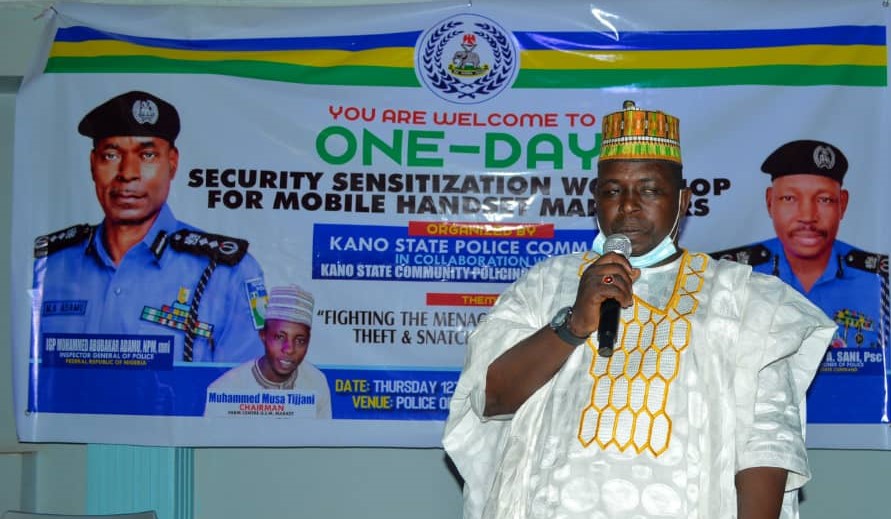 This was contained in a statement signed on 12th Thursday, 2020 by Kano Command Police Public Relations Officer, DSP Abdullahi Haruna.

Delivering his welcome address, CP Habu A. Sani, psc who was represented by DCP Sule Balarabe said: “With recent issues of Handset Snatching and Theft, the command has recorded successes, but not withstanding, there is need for all hands to be on deck and that the Mobile Handset Marketers are the major stakeholders in this regard.”

In his remarks, the Chairman, Kano Farm Centre GSM Market, Tijjani Musa Mohammed, said already, his executives have held meetings with members on the need to expose hoodlums who bring stolen handsets for them to buy and that they are ready to cooperate with the Police to decimate the menace of Handsets snatching and theft.

During the workshop tagged “Fighting the Menace of Mobile Handsets Theft and Snatching in Kano State,” presentations were made to educate and raise the awareness of participants on ways to identify handset snatchers, thieves and stolen handsets.

DSP Balarabe Mohammed spoke on, “Roles of Thugs in Handset Snatching and Robbery, “Nature of Thugs and How to Identify Them”,

SP Bala Mohammed looked at the, “Cooperation Between the Police and Handset Marketers: Roles of Marketers in Reducing the Menace of Mobile Handset Snatching and Theft.”

The Commands Imam SP Abdulkadir Haruna spoke on the need to preach peace, stay in peace and help in exposing criminals.

In his closing remark, the Chairman Jawwala GSM Market, Alh Aminu Soja extended his gratitude to God Almighty for having the opportunity to be invited by the command to have training on security sensitization on their Businesses, stating that they are always ready to cooperate with the command to end the menace of Mobile Handset Theft & Snatching.

CP Habu A. Sani, psc who spoke to journalists shortly after the workshop held at the Police Officers Mess, Bompai, said the handset marketers have agreed to work with the police and other security agencies to help clampdown of hoodlums specialized in selling stolen handsets.