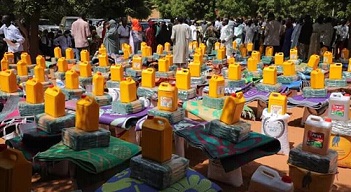 Sokoto state will soon commence the distribution of relief materials to all victims of flood in the affected 15 Local Government areas of the state.

The DG stated that officials of the Agency have commenced assessment and quantification of losses incurred in each of the affected local government area.

The relief items to be shared according to the DG, include Rice, millet, Guinea corn, maize, mosquito nets, cooking oil, mats, soap and textiles materials.

He said all flood victims in the state would be adequately taken care off during the distribution exercise.

The DG inform that SEMA has already established a 12-man standing committee in each of the 23 Local Government areas of the state with a view to have an up to date data of all the affected flood victims.

The committee’s members according to the DG, include representatives of SEMA, all security agencies at local government levels, traditional rulers and councilors under the chairmanship of each local government chairman.

He said officials of SEMA would ensure judicious and equitable distribution of the relief items in respective of political inclination.

In the beginning, the Agency purchased and shared amongst villages empty sacks for the blockage of moving flood waters to minimize further damages to residential areas, says the Director General.

He said Governor Aminu Waziri Tambuwal in his magnanimity approved the procurement of relief items worth millions of naira to cushion the effect of flood disaster in all the affected areas.

He advised communities living along river banks to move to the higher ground, with a view to forestall future occurrence of the unforeseen calamity.

We’re Aware of Attempts to Weaken North Before 2023