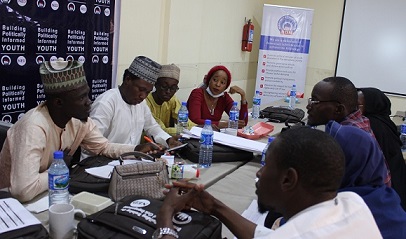 In the bid to entrench democratic tenets for effective and wholesome participations amongst youths of the North West region, Organization for Community Civic Engagement Organization (OCCEN) organized a 3-day capacity building workshop for youths from different states of the region.

Executive Director, OCCEN, Mallam Abdulrazak Alkali said: “The major objectives of the workshop are to train the youths to understand the generality of what democracy entails and also to provide a mechanism that would empower them to hold those elected to represent them accountable for their actions and inactions.”

On his expectations from the participants of the workshop, Alkali exuded the confidence that after the training, they would have increased their knowledge to understand how democracy works, human rights and constitution, while also expecting that they step down training in their organization.

“Our expectations are that after the training they would have increased knowledge of the understanding of democracy, rule of law and step-down the training for those who are not privileged to be here whether because of financial constraint, or other reasons in the same areas and topics, in order to have expanded knowledge amongst young people about the concept of democracy, ” he hoped.

Speaking at the workshop, Board Member, Centre for Research and Documentation (CRD), Professor Muhammad Habu rued that there are 3 major challenges confronting the Nigerian fledgling democracy since its return in 1999, which he described as “epileptic” considering its weak democratic institutions and the limit in which democracy can elicit good governance.

He said: “The challenges cannot be pegged on these three alone as there are other gamut factors putting spanner in the wheel of the development of the country’s democratic process, adding that for democracy to grow in the country, the government must be responsive and responsible.

“Democracy is a process and as a process it is normal to envisage challenges. But it is also good to remind ourselves that in some countries, they have gone too far to make their institutions of government very strong, unlike these countries, ours are very weak, and the extents which democracy can elicit good governance in Nigeria are very limited, insecurity is another issue”.

Prof Habu emphatically stated that the “raw resources” of the youth need to be tapped, by catching them young, training them on the workings of democracy in participating actively against all odds so that they can have their imprints in rekindling true democracy in Nigeria; dephasing that the civil societies, particularly, the youth sector have prominent roles to play.

“Youths have participate actively in the democratic process against all odds so that they would have their imprints in rekindling the country’s dwindling fortune of true democracy, he added.

He said the civil society especially the youth sector has prominent roles to play in educating the youth so that they can become leaders of tomorrow.

The Prof advised stakeholders to come in and not to botch on their responsibilities, noting that it would be in the collective interest of the stakeholders to converge and discuss the issues that affect the growth of democracy in Nigeria, and also frowned at some undemocratic tendencies.

In his brief remarks, he encouraged the participants to take part in the political process with sole aim of bringing development to their people, as a young person himself, he believes Nigerian politics need young people and fresh ideas.

The event ended with the award of certificate of attendance to the participations by Hon Nura.

Kudos to all resource persons for this enlightenment. However, another major challenge or issue is how to address this great monster of god fatherism which is a threat for true democracy to prevail, but then how? Because the same god father uses the youths the way they wanted in order to achieve everything.