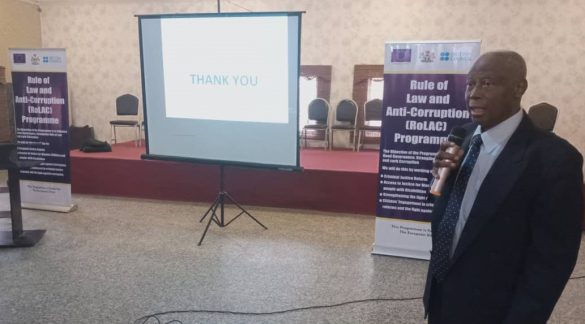 The Kano State Chief Judge, Justice Nura Sagir Umar, has said that, there is a need for greater cooperation between the judiciary, police, correctional services and ministry of justice to successfully implement the new Administration of Criminal Justice (ACJL) in the state.

The Chief Judge made the remark at the opening of a 2-day sensitization workshop on key provisions of the ACJL, which came into effect in 2019, for High Court Judges at Tahir Palace Hotel in Kano on Wednesday, 4 November, 2020

The consultant and lead facilitator of the workshop, Hon Justice Peter Obiora highlighted some of the innovative provisions of the ACJL as among others emphasis cause for speedy trial of criminal cases and remand such that anybody in custody will be granted bail after 63 days in detention without charge.

Other unique provisions, according to Justice Obiora include but not limited to matters of adjournment where lawyers ask for adjournments to delay trial, the law has placed a limit; adjournment cannot be done more than five times in the life of a case, another is the issue of appeal and ask for stay of proceedings, the new law has abolished stay of proceedings; if trial starts, it does not stop in anyway.

He said the new law also abolished arrest in lieu, criminalizes police brutality and in taking dependent statement, the law provides that it be recorded electronically in the presence of a legal practitioner or anybody of the choice of the dependent.

A second Consultant speaking at the workshop, Professor Abdulmumini Bala Ahmed of the Department of Private and Commercial Law, Faculty of Law, Bayero University Kano, said ACJL is all about the procedural rules that regulates proceedings in court.

Prior to the new law, there was the Criminal Procedure Code (CPC) which came into being in 1959, and over the years have become outdated and not in tune with the modern realities according to the Professor.

Professor Ahmed said the ACJL came to address most of the challenges in the application of CPC that have been discovered over time. Unfortunately, the CPC has stayed in the psychology of the justice practitioners and it will take time for them to adjust to the ways of the new law. The current training is one of the ways to achieve the required sensitization of the judges and magistrates to adjust to the realities of the new law which is now the only criminal procedure code in the state addressing both English Common Law and Sharia Law.

He said the new innovation in the Kano ACJL that is different from any other ACJL across the country is that, there are no demarcation between proceedings in sharia court and in common law courts; the procedural rules now are the same.

Prof A B Ahmed said ‘gone are the days of where a case will take 10 to 20 years as section 127 of ACJL states that “unless of course there is serious reason no proceedings of any criminal case should last more than 90 days and if it does, the judge seated or magistrate must give explanation to the Chief judge why hi has not been able to complete the case within the 90 days”.

According to the Professor Ahmed, Kano ACJL has also shifted its attention from punishment to reformation and non-custodial sentencing; judges and magistrates have been encouraged to use it. Instead of sending someone to correctional centers, the new law gives an option of community service like sweeping market places or washing public toilets.

Justice Nasir Saminu of the High Court of Justice, Kano said: “The workshop is impressive in the sense that it has come at a time when all stakeholders in the justice sector are determined to see to the decongestion of our prisons (Correctional Centers).”

He also said the workshop has educated participants on the application of ACJL in Kano but RoLAC should find a way engaging the government at all levels for proper funding of the justice sector (courts, police, ministry of justice, correctional service center and the legal aid council) without which, the implementation of ACJL may be difficult to implement to some extent.

Justice Maryam Sabo mni of High Court No 19 Kano said: “The workshop is apt and it has come at the best of time; it is highly educative and it provides opportunity to discuss the innovations and the challenges of implementation.”

“I can say the law is a paradigm shift to ensure speedy trial, decongestion of correctional centers, fair hearing and protection of the society as the interest of victims and defendants are all taken care of by the provision of restitution and compensation.”

“With respect to plea bargain, prosecution should always make effort to see it is done in the interest of justice, public interest and public policy,” she added.

In his brief closing remark at the end of the 2-day workshop, the Chief Justice of Kano State says implementing the new law “will not be easy. But we (magistrates and judges) should sit up and be more hardworking”. He described the workshop as highly educative and while thanking to RoLAC for organizing it, said more capacity building for judges and magistrates in Kano and we are very grateful

The Administration of Criminal Justice Act (ACJA) in Nigeria has increased the formal compliance to human rights issues in States where the federal Law is being ratified.

The advantage of the ACJL is that the interests of the accused person (not yet convicted) is protected while the previous laws had provisions that discriminated against the rights of women in a way. The ACJL is a huge breakthrough to the challenges of prolonged trials in federal and state courts.

The CPC is used for states across the north while the CPA for southern states of Nigeria.

The CPC and CPA have been in use for decades without reforms; lawyers and judges take advantage of their lapses to prolong trials which results in correctional Centers across the country.

As a response to these shortcomings, the ACJL was introduced to ensure that the criminal justice system becomes more effective and efficient as well as responsive to the rights of the people, but it did not completely erode the provisions of the CPC and CPA.

With support from the European Union (EU) funded Rule of Law and Anti-Corruption (RoLAC) Program which is managed by the British Council, Kano state successfully domesticated the ACJA 2015 in 2019. It is called the “Administration of Criminal Justice in the Courts of Kano State and for other related matters”.

We Will Carry You Along – KANSEIC Chairman Assures People with Disabilities