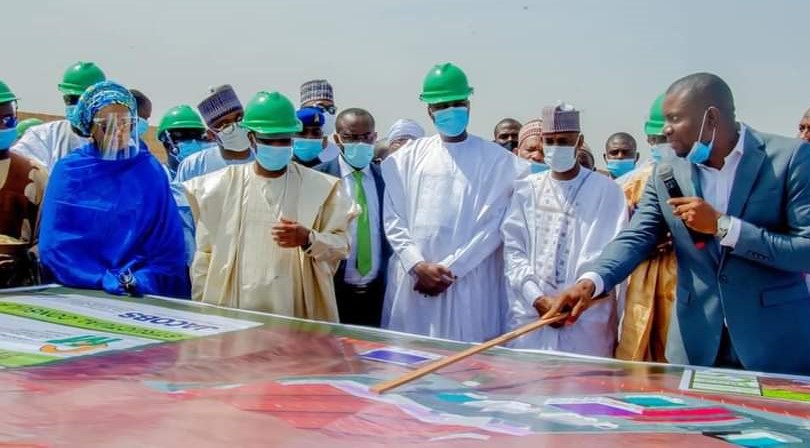 Gov. Aminu Waziri Tambuwal of Sokoto State Wednesday, 4 November, 2020 laid the foundation for the construction of a 13-million-dollar fertilizer blending plant by OCP Africa Fertilizers Nigeria Limited in an industrial layout in the outskirts of the state capital.

According to Gov. Tambuwal, the company, with a production capacity of 200,000 metric tonnes per annum, would be guaranteed 100 percent Return on Investment (RoI) in terms of contract that the state government will award it for the purchase of its products in like sum once the company completed its plant and commence operations July next year as scheduled.

The contract, noted the governor, “will enable the company recoup its investment” in the project designated as an agricultural center of excellence within the first year of its operation.”

This gesture is part of the administration’s objectives to “attract genuine local and foreign investors to the state,” said the Governor, who enumerated its package of incentives as: “provision of infrastructural facilities at industrial layouts, easy access to land, tax holidays, as well as joint venture partnerships.”

In this regard, OCP Africa has started benefitting from the state Government’s incentives with the granting of a piece of 10 hectares land and its certified title deed (Certificate of Occupancy) to it by the state government in less than 24 hours last year.

Gov. Tambuwal hinged his administration’s drive in this direction to the fact that “countries of the world are gradually gravitating towards non-oil revenues, “thus the need for the state government “to focus on the development…so as to decrease our dependence on oil with a view to increasing our internally generated revenue (IGR).”

“Our administration will not relent in its effort to move Sokoto state forward for sustainable development in all sectors” the governor added, pointing out that the government’s determination is to not only to promote but also improve agricultural production for food sufficiency promotion of agricultural business.

In his remarks, the Deputy Managing Director of OCP Africa Fertilizers Nigeria Limited, Mr Caleb Usoh, said upon completion “it will provide direct jobs for 75 persons and also serve as a center of training for fertilizer manufacturers, farmers and other members of the agricultural value chain.”