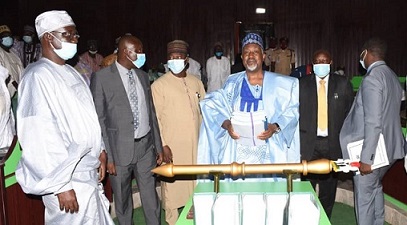 The Jigawa state Governor, Muhammad Badaru has presented the sum of N156.6billion appropriation bill to the to the State House of Assembly for 2021 fiscal year.

Speaking while presenting the budget on Wednesday, Governor Badaru said, the 2021 budget is tagged “Budget for sustained economic growth and human capital development for achieving second phase of change agenda.”

Gov Badaru pointed out that, sustaining economic growth and human capital development would be pursued by economic diversification derive through agriculture.

The sum of N78.241 billion which is almost 50:50 ratio is for capital investment and N78.34bn was earmarked for recurrent expenditure which comprised of provision of contingency and stabilization.

Two sectors include education and health received the allocation of almost 50% of the total budget amounting to N78.25bn in which Education sector received 36.4% while Health 13.5%. Roads and Electricity consist of critical infrastructure earmarked N14.6bn with all ongoing roads and rural electrification to be completed and commissioned.

The Governor explained that the sum of N6,040,000,000 is proposed to be expended on water supply and sanitation which will cover components of water sanitation sectors comprising of urban, small towns and rural supply.

According to the budget the sum of N19.9 billion is proposed for capital expenditure in education sector, the sum of N12.24 billion for Health sector, N5 billion for post covid-19 empowerment programs.

He explained that ministry of agriculture and livestock development received N12.1bn t N6.5billion, ministry of women affairs got N1.7bn and ministry of information N1.9bn respectively.

Other sectors include land administration, housing urban development and regional planning with allocation of N869,500,000 comprised of payment of lands and property compensation, implementation of low-cost commercial housing and urban development programs.

Governor Badaru however presented the budget of the 27 Local Governments councils of the state amounting to N71.83 billion which is about 5% over the 2020 original consolidated approved estimates of about N68.32 Billion.

In his remarks after presenting the budget, the Speaker of the State House of Assembly Hon, Idris Garba Jahun, said that the budget would be given the inputs it deserved and also ensure the speedy passage of the budget to enable government continue delivering dividend of democracy to Jigawa people.

Hon Garba also commended the executive for achieving higher percentage in the implementation of 2020 budget despite Covid-19 pandemic.