Menu
Home Opinion Power Without Innovative Thinking is Nothing
Opinion 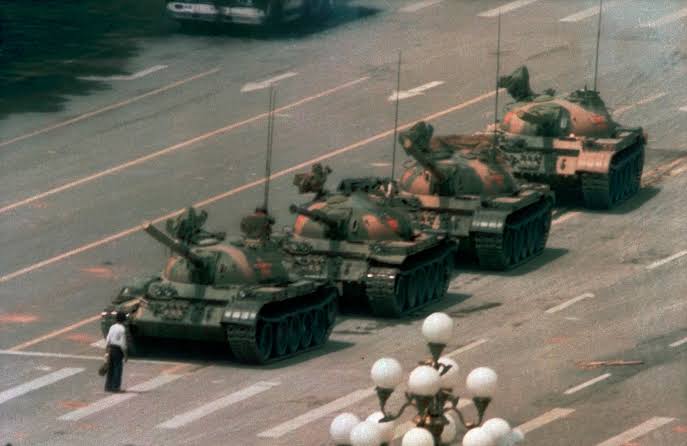 On June 5, 1989, a column of Type 59 tanks of the Peoples Liberation Army of China rolled into Tiananmen Square to suppress the protests of the Chinese youth that had been going on since April 14, 1989.

A 19-year-old undergraduate, Wang Weilin stopped the incursion in the attached iconic image which was captured by telescopic lens from a sixth-floor balcony a kilometer away and smuggled out of China before it was published. The grouse of the Chinese youth was mainly the lack of jobs, economic prosperity and political participation.

The Chinese government in the short term embarked on “Operation Yellow Bird” to suppress the protests.

The young man, Weilin was executed and the protesters dispersed. Reportedly, hundreds were shot and the lucky ones imprisoned with hard labor.

However, in the long-term Deng Xiaoping reacted by expanding the Chinese economy with a master plan that culminated into “One nation, two systems” His vision was that China would remain Communist but practice Capitalism.

Mr. Deng was a dreamer but awake to the reality that what confronted China at Tiananmen Square was not only a threat to his power but a general wakeup calls for the entire nation to reinvent itself or perish.

He summarized his new approach in his own words; “It does not matter whether a cat is black or white as long as it catches mice” The Chinese are supremely rational people who post-Tiananmem came to the realization that for them to be politically stable they have to be economically prosperous by thinking outside the box of conventional wisdom.

What is the master plan of the Nigerian political class post-EndSARS?

China is where it is today because they harnessed youthful exuberance into patriotic ventures. Their leaders also developed a different value system different from Western liberal democracy. That is why there is neither Facebook, Twitter nor Google in operation on the internet in China today.

They all have their versions developed by their entrepreneurs within their own borders. Instead of YouTube they have their own Tudou. They don’t use WhatsApp so they developed WeChat. Their Twitter is Weibo and rather than Instagram they invented TikTok. To pull that off they had to look inwards.

Their ASUU did not go indefinite strike as Chinese institutions of higher learning became centers for research and development. Mr. Deng created the enabling environment for many of protesters back in 1989 and now their children to fully participate in the Chinese economy in productive ventures.

They have now got to the stage of, dare loot their treasury they will shoot you and make your family pay for the bullets!

Without properly managing our diversity we ain’t getting anywhere.

As long as Nigerians see themselves as North, South, Christian or Muslim it will never be Uhuru.

Post-Tiananmem Square there was an elite consensus in China. Communists and Capitalists agreed to work together in the overall Chinese interest.  That however can’t happen in Nigeria when there is no strategic thinker like Mr. Deng. So, we have a leadership template whereby senators hoard motorbikes and governors’ palliatives to use hunger as a political weapon against the same people that voted them into office in the first place.

After 60 years of national independence why should State of Origin not be replaced with State of Residence? When will indigene-settler conflict end in our country? How can any Nigerian be a “stranger” within Nigeria?

I shudder if after President Buhari’s administration a Southerner assumes power. Who will blame a South West president that would zone all key appointments and service chiefs from Okitipupa to Offa or Arondizogwu to Isikwatou as the case may be?

It will certainly be “Back to Sender” instead of national progress and development. Or will there be another Alhaji Lawal Kaita who on October 6, 2010 openly stated; “The North is determined to make the country ungovernable for President Jonathan or any other Southerner who finds his way to the seat of power” See details in pp 15-16 of My Transition Hours by Goodluck Ebele Jonathan (2018)

Who wrote the 1999 Constitution? It was packaged by the General Abdulsalami Abubakar led junta and shovelled down the political throat of Nigerians.

Does that document fully fits our realities and national aspirations? I have my doubts. That constitution needs to completely overhauled and totally reengineered with the opening words; “We the people of Nigeria……”