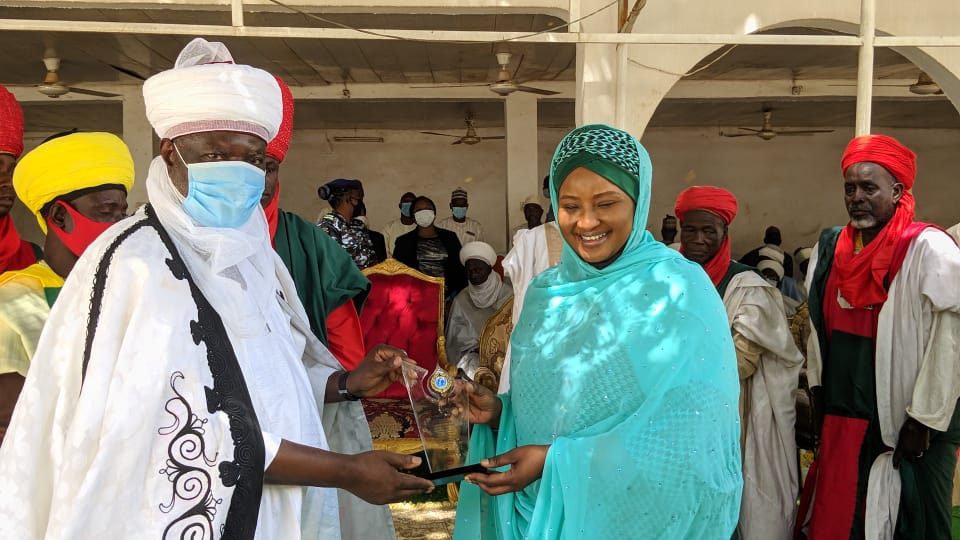 The wife of Kebbi State Governor, Dr.Zainab Shinkafi-Bagudu says the successful elimination of Polio from Nigeria will not have been possible without the effective contribution of the  traditional fathers.

Dr. Zainab made this acknowledgement in Argungu at the celebration of World Polio Day 2020 at the Emirs palace, Argungu.

The paediatric consultant is happy about the wise counsel by traditional rulers in Kebbi State and other parts of the Federation individually and collectively through the Northern Traditional Leaders Committee (NTLC).

She commended the Emir of Argungu, Alhaji Samaila Muhammdu Mera for his role, acclaimed internationally to countering misinformation which helped to overcome boycott of the exercise.

The wife of the governor commended her husband, governor Atiku Bagudu for prompt release of funds and providing necessary support that made it possible to attaining 80 percent coverage of polio immunization in Kebbi State while also acknowledging the political will of President Muhammdu Buhari.

She urged parents and health workers to sustain the landmark eradication of polio in Nigeria.

On cancer, the Director of the Union for International Cancer Control (UICC), Dr Zainab Shinkafi Bagudu said that 26 women die of cervical cancer daily and “As it stands, Nigeria has the highest cancer death rate in Africa. Cervical cancer can be eliminated by a simple vaccine against the human papilloma virus- HPV.”, she counseled

Dr. Zainab Shinkafi Bagudu who was recently elected as the Director of the Union for International Cancer Control (UICC) used the occasion to announce that the country is set to commence the vaccine against the disease in 2030 sequel to the adoption of a global strategy by World Health Organization (WHO) to eliminate the cervical cancer by 2030.

She stressed the need to learn from the polio experience of ensuring adequate enlightenment campaigns in communities in order to achieve success of the exercise.

She also revealed that, her foundation, Medicaid Cancer Foundation in collaboration with Civil Society Organizations (CSOs) had been working with local and International partners to ensure the vaccination became a reality for women.

She noted that “In Yauri, area of Kebbi State, with support funding from Jaiz Foundation, they pioneered a pilot vaccination study for 100 girls, the findings of which she promised will be published soon in a peer review journal.

“she therefore prayer that the the fight against cervical cancer using the HPV vaccine receives the same momentum that polio has received in Nigeria.

In his remarks, Dr Razi Muktar, representative of World Health Organization (WHO), acknowledged the role played by the traditional institution in the fight against polio especially the Emir of Argungu, Alhaji Samaila Mera.

In his remarks, the representative of the National Primary Health Care Development Agency (NPHCDA), Alhaji Shehu Abdul-Ganiyu, stressed the need for continued polio immunization in spite of polio free certification indices of the country.

He also tasked traditional and religious leaders as well as other stakeholders to sustain advocacy and mobilization of women to attend ante -natal care facilities nearest to their communities.

The Chief of Field office UNICEF Sokoto, Muhammadeen, represented by Mustapha Illo said the organization was always glad to be associated with Kebbi Government and acknowledged the strong leadership role played by Kebbi governor with traditional leaders in elimination of Polio in the state

Speaking at the events the Emir of Argungu, Alhaji Samaila Muhammdu Mera, commended all those in position of authority and development partners for their support to end polio in Nigeria.

Adding that the fight to eradicate polio is a collective one, hence the need to appreciate all for their wonderful contribution.

Mera also assured of the readiness of all traditional rulers across the state to continue to support and sustain all policies and programmes of the government.

The Commissioner for Health, Jafar Mohammed similarly lauded the efforts of governor Abubakar Atiku Bagudu, his wife Dr. Zainab Shinkafi Bagudu, national and international partners for their individual and collective support for the fight to end polio in Kebbi State.

Highlight of the event was a drama by polio survivors who stressing the need for immunization. Meanwhile, exchange of awards and presentation of certificates between the wife of the governor Dr. Zainab Shinkafi Bagudu and his royal Highness, the Emir of Argungu, Alhaji Samaila Muhammdu Mera.  And stakeholders who made various contributions to the eradication of polio in the state were also presented with awards of appreciation.