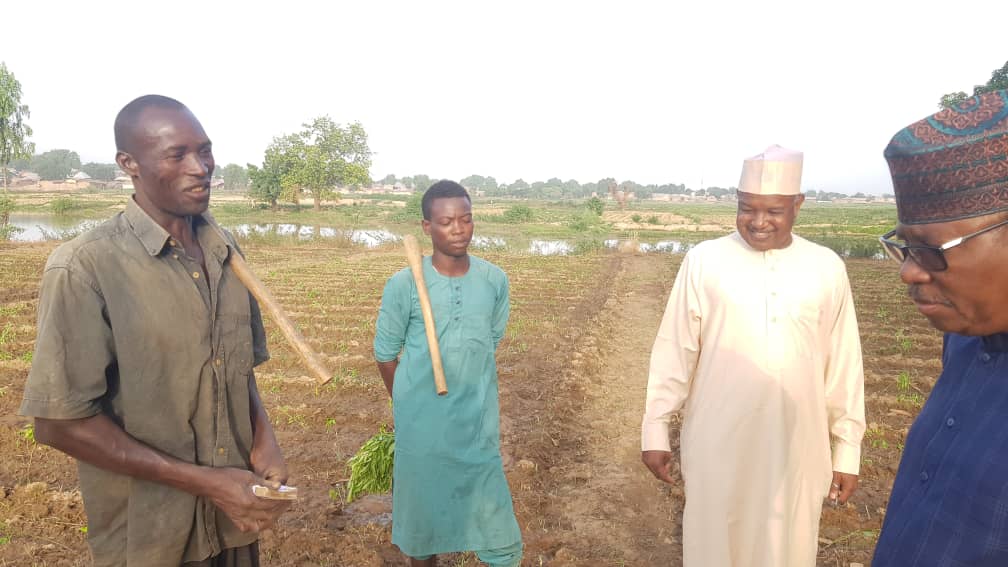 Following the flood which devastated Kebbi State, Governor Atiku Bagudu has continued with visits to farming communities to mobilize and encourage them for expanded food production for dry season cultivation.

The governor made the remarks after inspection visit to a cassava farm in Maiyama local government. Bagudu expressed delight that youths in Kebbi state have wholeheartedly and patriotically engaged in farming activities.

This, the Kebbi Governor further noted, would contribute to making Nigeria self sufficient in food production, improve their personal lives and boost the economy of the state.

Bagudu said:” The youth have restrained themselves from being lured and influenced into violent protests, to cause mayhem and destruction.

” Rather, our disciplined youths have chosen to make themselves useful to themselves and the state, by massively embracing all the invaluable agricultural programmes of both the Federal and Kebbi State Governments.

” This is a happy development and it cannot come at a better time than now when we are strenously making efforts to uplift the living standard of the people of the state.

“Also, I am elated that,these energetic youths have decided to use their energies on the farms, rather destructive #ENDSARS protests that had lost meaning and focus.”

Bagudu also underscored the importance of the cassava and other food crops programmes towards adding significant value to the National Food Security Programme.

The governor pledged to expand the various programmes, as well as the provision of little rainfall requiring cassava and rice seedlings, inputs and other related implements.

He commended the policy thrust of President Muhammdu Buhari which he described as a motivating factor as well as support from the CBN in order to achieve the desired results for food production in the country.

A young farmer, Hassan Bala , commended the Governor for his sustained commitment to ensure that , the people of the state produce enough food for subsistence and marketing.

The governor was accompanied on the trip by Commissioner of Finance, Alhaji Ibrahim Muhammed Augie and other top government officials.

I Am Proud of HMB – Dr. Tsanyawa