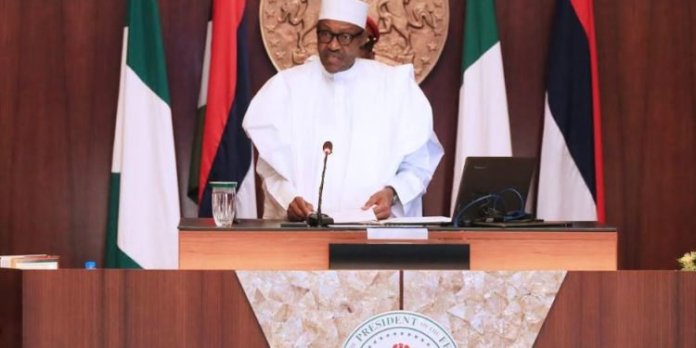 President Muhammad Buhari has sent a delegation to Jigawa state to solicit the support of political, traditional, religious and community leaders in the state against the violence that emanated from the #EndSARS protest in the country.

The delegation visited the state under the leadership of Federal Minister of Water Resources, Engr Sulaiman Adamu.

Speaking during a courtesy visit to the state, Hon Adamu said: President Muhammad Buhari directed him to visit the state and engaged with leaders to promote tolerance, peace and stability in this critical moment.

The Minister told the Governor that, the initial peaceful demonstration against alleged police brutality was inline with Nigerian constitution, but the protest took another dimension of infringing on the rights of other citizens, killing of innocent persons, looting and other criminal act against the nation.

Engr Suleiman added that, the president is willing to listen to any genuine complying from youth, elders and any well-meaning Nigerians but will never ever tolerate any acts of breaching public peace and national stability.

He told the Governor that, president Muhammad Buhari is soliciting his support and all other political leaders in the state to properly address the people of the state on the need to dispel any rumors that is tantamount to create disunity among Nigerians and also throw the nation into crisis.

“The president asked me to extend his gratitude on the kind of understanding, support and cooperation given to his government by people of Jigawa state in promoting peace, unity and national development.

The Minister how ever visited the Emir of Dutse Dr Nuhu Muhammad Sunusi and Emir of Hadejia Dr Adamu Abubakar, as part of the engagement and inputs gathering in the state.

In his response Governor Muhammad Badaru Abubakar said, Jigawa state is one of the peaceful states in the federation and promised to continue with all it requires to complement the effort of President Buhari in making Nigeria peaceful, prosperous and greet nation.

In his remarks, the Emir of Dutse, Dr Nuhu Muhammad Sunusi said, Jigawa youth are law abiding citizens and have respect for their elders.

He also promised continue to join hands with Ulamas and parents to keep inculcating moral discipline in the minds of the youth to make them to be proud of the Nation.

The Emir however joined those calling for police reform, but emphasized on the need to maintain regular training and retraining of officers and men of the police force while providing good welfare and ensuring only responsible persons are recruited into the police force.