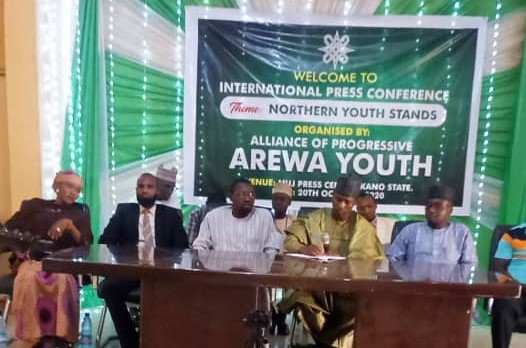 Below is the full text of the press release:

1. Leaders of youth organizations in the North present here and those who send representation, youths who have graced this occasion, members of fourth estate of the realm, we welcome you to this press briefing/conference on behalf of Executives of Alliance of Progressive Arewa.

2. As leaders representing different Northern youth groups and as mirror and mouthpiece regarding issues that affect youth generally, we arranged this press briefing/conference to present the stand of Northern youth on the ongoing protest aimed at drawing the attention of Federal government and especially state governors on the deteriorating state of Northern states in the areas of education, healthcare, roads and most disturbing of all, insecurity in the form of banditry, cattle rustling, armed robbery and kidnapping for ransom.

This press briefing/conference is therefore a clarion call from amalgamated Northern youth groups to the Federal government and state governments to rise up to the challenges confronting the region.

3. We wish to salute the courage of the different youth groups in the North who came out to protest peacefully in their different states to draw the attention of Federal and state governments to the deteriorating security situation, collapsed infrastructure such as roads and dams leading to flooding of communities, failed roads and bridges that have made road travel worst nightmare for our people.

While we may not have pronounced cases of abuse by SARS compared to the south, the EndSARS protest was a wakeup call to our youth here in the North to also call attention to the myriad of problems confronting us chief of which is insecurity that has destroyed lives and properties, ravaged communities and farmlands, displaced our people and turn them into internally displaced persons (IDPs) across the region.

It is therefore disheartening to note that these youth groups who came out to protest peacefully especially in Kano were attacked by hoodlums. We condemn in strong terms this act of barbarism and criminality, and call on state governments to protect our youth engaged in peaceful protest.

4. We the Alliance of Progressive Arewa Youth are alarmed at the speed at which the North is deteriorating in all indices of development.

The menace of poverty, almajiri beggars, school dropouts, poor school enrolment especially of the girl-child, communal clashes having ethnic and religious colouration have combined to turn the North into a giant shadow of its former self.

We note that since the onset of democracy in 1999, elected leaders of the people from the president to state governors to state and national legislative members have only largely served their different political interests to the detriment of the interest and overall good of the people. It is sad and disheartening to note that it is the same problem across all states of the North. From one administration after another, it is a story of serial betrayal of trust of the people, as there is nothing concrete to point to in terms of deliverables compared to huge federal allocations and internally generated revenues of these states.

The bulk of these funds are diverted to servicing personal interests of few government officials and their cronies. Therefore, while this massive corruption and fraud persist over the past twenty years, the fortunes of the North nosedive leading to the current state of things where insecurity has destroyed lives, crippled the economy and rendered farming impossible. The end result of all this is that poverty has risen to an all-time high, further exposing the region to many more ills.

5. We wish to painfully note that with a few exceptions, most of the governors who held forte as governors across the states in the North since 1999 to date contributed immensely to the sorry state of affairs of these states. Most of them engage in building political empires to feather their nest instead of developing their states. By so doing, they created divisions, tensions and suspicion that snowballed into two decades of intermittent communal clashes that have ethnic and religious undertones in states such as Kaduna, Benue, Nassarawa, Taraba, Kogi, Taraba and Niger.

In particular, the Boko Haram insurgency which has been ravaging states in the Northeast since 2009 was sparked by political intrigue and contest for political power. The governor’s incomparable quest for power and domination has destroyed the understanding, tolerance and trust entrenched by the late Premier of the North, Sir Ahmadu Bello, Sardauna of Sokoto and his lieutenants composed of people of different background across the entire stretch of the North.

Rather than build on the values of trust, honesty, integrity, transparency and accountability which Sardauna entrenched in the Northern civil service, these governors destroyed the remaining traces of these values and perpetuate a regime of profligacy, massive corruption and plunder of state resources meant for service and development. These governors have turn themselves into thin gods deploying state resources to further their insatiable political interest. They influence appointment of Ministers to the centre and appointment to MDAs of people lacking in competence and capable representation.

This crude wields of power extend to election of LG chairmen, members of state and national assemblies, so that these people instead of being answerable to the people, answer only to the governor. This is the sad reality that has thrown the North into its current degenerating state and its youth population into hopeless situation with no salvation in sight.

The single most challenging threat to the survival of the North today is insecurity and it doesn’t appear the governors have put forward any coordinated effort to confront it headlong. Each state is left alone to carry its own cross as far as the challenge of insecurity is concerned. Cases of banditry, kidnapping and cattle rustling is so pronounced in Kaduna, Katsina, Zamfara, Sokoto and Niger, but we cannot say if these governors have met to coordinate efforts to confront these acts of criminality.

7. We also note with pain and regret that never before have the status of our traditional institutions been reduced to an all-time low than now under this democratic dispensation. Agreed that our traditional rulers do not have any defined role in the constitution, but they are still held in high respect and as fathers of the land. They are closer to the people and know the problems of each community under their domain across the state.

Rather than according them their right place as fathers of the land and important partners for development of the state, some state governors for political expediency have relegated them to the background.

We are living witnesses to the near absence of the region’s voice of conscience which is that of the Arewa Consultative Forum (ACF).

Today ACF exist only in name because they are not accorded their rightful place as elders and conscience of the North. Most of the key members of this important political and cultural organization have been maligned and negatively profiled for always speaking the truth on issues that have direct bearing to the development of the region.

What’s more, these governors under their watch have allowed those institutions that have insignia of the North to degenerate to a state where they do not hold any value economically. Today we are all living witnesses to the disappearance of institutions like Bank of the North (BON), New Nigerian Newspapers (NNN), Northern Nigerian Development Company (NNDC), etc.

Therefore, the summary of these degenerating examples is that the North currently does not have a symbolic leader who can be respected to speak with one voice for her. Nothing can be sadder and disturbing to a region that once boast of the best crop of leaders in Nigeria.

8. At this juncture, therefore, we wish to state categorically that the greatest enemies of the North are the governors of its constituent states from 1999 to date. They did not demonstrate the right kind of leadership expected of them.

If only they remember the foundation on which the North was built and they tried to build on that foundation, the story would have been different. With minimal resources, prudent management, transparency and accountability, Sir Ahmadu Bello and his were able to lay strong foundation for the region with world class infrastructure in education, healthcare, roads and housing. Where are we today?

10.Therefore, we the Alliance of Progressive Arewa Youth, taking these observations into consideration, have resolved as follows:

a) Have directed that all protests regarding EndSARS and its accompanying problems associated with the region should be suspended forthwith. We shall arrange a forum to brainstorm on major issues confronting the North and how to confront them.

b) We have resolved to convene an emergency conference that will involve all stakeholders such as the governors, elected legislative members of states and national, traditional institutions, elders and youth groups, religious clerics and the general public.

c) The emergency conference shall be entitled as Emergency Northern Conference with the theme: “Who Will Speak for the North?”

d) The purpose of the conference is to discuss and come up with concrete solutions to the mammoth problems confronting the North, part of which is to design a model of unity and tolerance for the region.

e) We will name the person to chair the conference and two people to assist him in this task.

f) We have resolved that any governor that refuses to attend the conference without any justification will be tagged enemy of the North and its progress, and his future political opportunity blocked.

g) The names of the organizing committee members for this conference will be announced in due course.