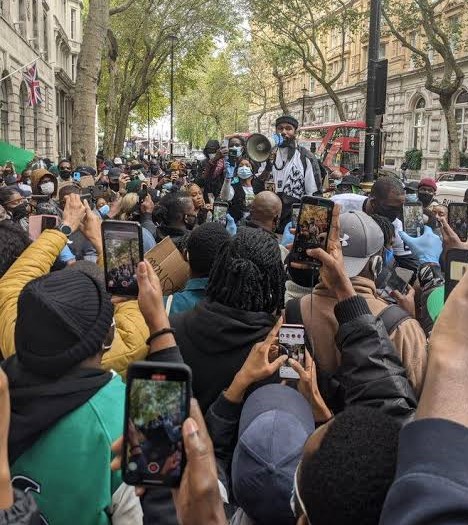 “Power never concedes anything without a demand. It never did and it never will” – Frederick Douglass (1818-1895)

The ruling All Progressive Congress (APC) in the last 6 years of its existence has not been able to adequately answer the question posed by Oby Ezekwekisi during that party’s first national summit after inception in Abuja on March 6, 2014; “How will you tackle the greatest obstacles that have made development elude our nation?”

Dr. Ezekwelisi who was the APC keynote speaker warned; “The discussion which you should be leading the country to have is how we must end the painful state of elusive development of Nigeria and improvement in the lives of citizens. Anything other than that is the same. It will prove that your party is nothing more than a mere platform for securing access to the largesse of the state”

Lest we forget that the political weaponization of Social Media as tool for anti-government mobilization started during the fuel subsidy removal protests that took place nationwide from January, 2 to 14, 2012.

At peak of the of the Black Lives Matter (BLM) protests that rocked the US in the recent past the number of Social Media tweets reached over 3 million per day. In sharp contrast the EndSARS tweets last Sunday peaked 28 million. This simply means the main political terrain in Nigeria has now shifted online. The attached scene last Sunday of protesting Nigerians on British soil outside our High Commission in the heart of London is a huge reflection of that paradigm shift.

For any ardent student of power and keen observer of political events in Nigeria and indeed beyond there is now an unmistakable feeling of Déjà vu – the feeling that one has lived through the present situation.

On the 2012 protests at Ojota targeted against his government former president Goodluck Jonathan notes in his memoirs; “It was like a carnival. Musicians, comedians, and other celebrities were engaged by opposition elements to join the protests. Refreshments were served to the protesters.

Every morning Lagos State Government workers cleaned up the Gani Fawehinmi Park and prepared it for the day’s protests. It appeared as if the protesters were special guests of the Lagos government. Similar scenarios played out in other opposition-controlled states.” See details in pp 22-26 of; My Transition Hours by Goodluck Ebele Jonathan (2017).

I have carefully compared the organizational efficiency and potency of 2012 mass action with the current spate of EndSARS protests. Despite all the major concessions of the Inspector General of Police (IGP) and indeed Mr. President there is one common denominator in active participation – Omoleye Sowore.

I give it to this former Students’ Union President of University of Lagos (Unilag) during the June 12 crisis back in the mid 1990s as the first Nigerian to weaponize Social Media through Sahara reporters to be a potent political force.

I also find it instructive that the 5-point demands of RevolutionNow unveiled on August 5, 2019 mirrors the current 5-point demands of EndSARS. If this is mere coincidence then it must be indeed a very curious one. Sowore made a cameo appearance on first day of the EndSARS protests in Abuja and then faded into an apparent oblivion. This is not to imply Mr. Sowore has any major role in the EndSARS protests though the modus operandi and circumstantial evidence available in the public domain suggests otherwise – “Biri yayi kama da mutum”

With the benefit of hindsight, the hashtag RevolutionNow was first deployed at the January 2012 protests to fire the embers of revolt against a sitting government by then diverse elements of the opposition now in government under the aegis of APC.

As they say what goes around comes around because back in January 2012 the protests kick started on the removal of fuel subsidy but mutated under OccupyNigeria to issues bordering on; “Corruption in Government & public service, Inhuman treatment of Nigerians by Government & Security , High rate of poverty” According to the organizers back then many who are today APC stalwarts their goals were; “Reversing the Removal of subsidy on petroleum products, Federal Government budget review and cut-backs on politician allowances.”

The protesters back then changed the position of the goal post in the middle of the game exactly how the present corps are doing now.

Why has the APC special purpose vehicle not been able to politically carry along the yearnings of a generality of those that rooted for it in the 2015 and 2019 polls?

My take is that the ruling APC is a band of supreme opportunists and criminally privileged band of political jobbers no different from their PDP cousins brought together for the sole purpose of removing Goodluck Jonathan from office without necessarily changing the system nor overhauling it. The irony is that same tactics it deployed while in opposition is now being used against it whilst in government!

Can the ruling APC ever come to equity with clean hands in Nigeria?

The records clearly speak for themselves. On November 24, 2014, DSS raided the APC data office located at No. 10 Bola Ajibola Street at Ikeja in Lagos.

According to Marilyn Ogar, then spokesperson of the service, evidence of party membership register tampering was uncovered including “an elaborate and well articulated plan to hack into INEC’s voter registration data base” Ms Ogar also stated that hacking tutorial videos were recovered that instruct viewers “steps and procedures of system hacking, passwords cracking, decrypting, escalating access privileges and creating backdoors to servers,’’ she added.

Ms. Ogar also said that the tutorial clearly explained how to evade security of database such as Intrusion Detection Systems (IDS), firewalls and other measures put in place to deter hackers’’ See details in Premiumtimesng webpage of January 7, 2015

Would picking up the leaders of the EndSARS protests fundamentally change anything?

I have my doubts because of the online techniques adopted to finance the protests. Already; “Feminist Coalition has announced that it has raised the total sum of N37,355,149.48 in crowdfunding for the protest which is aimed at supporting protesters. The recent figure indicates an addition of N31 million in four days, up by 487.8% from its last figure on October 10, 2020 which stood at N6,354,561.27.”

Can counter protests to EndSARS make any difference?

It is against this peculiar background that I have noticed the apparent strategy of the EndSARS protests so far is to have no visible leadership structure or particular spokespersons.

The protests don’t have any identifiable command structure. That is classic Law 48 of the 48 Laws of Power; “Assume formlessness. Be as fluid and formless as water; never bet on stability or lasting order. Everything changes”

It is now clearly obvious to Nigerians that political cohesion and solidarity expressed by the founding fathers of APC in opposition was mainly underpinned by the necessity of eventually fulfilling the political self interest of its various confederates when power is captured.

The ruling party is therefore the main architect of its own political nemesis for refusing to adequately answer Oby Ezekwelisi’s all-important question.

In retrospect, Niccolo Machiavelli (1469-1527) offers a plausible explanation on why and how the ruling APC squandered the enormous goodwill that first ushered it into our national political consciousness; “Necessity is what impels men to take action, and once the necessity is gone, only rot and decay are left”

As Mr. Frederick Douglass has elucidated; Nigerians clearly demanded of the Jonathan government. Now the same favour is being extended to the Buhari administration.

Agreed Signor Machiavelli also put it that; “It must be considered that there is nothing more difficult to carry out, nor more doubtful of success, nor more dangerous to handle than to initiate a new order of things” This then implies that the seemingly lack of the promised “change” is what invariably provides the enabling environment for the EndSARS protests.

I humbly stand to be corrected!

Covid-19: The Challenge of Sustaining the war Against Child Malnutrition in Jigawa