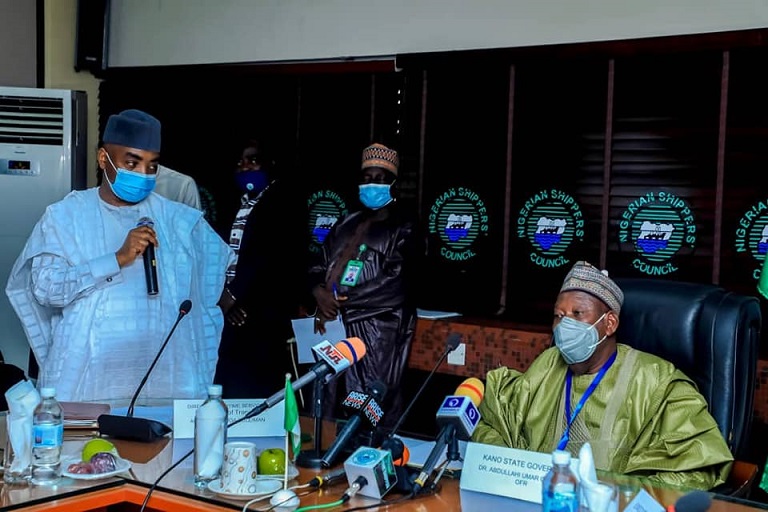 Appreciating governor Abdullahi Umar Ganduje’s commitment in the signature project of Kano Dry Port, for an effective resuscitation of the the state economy and the overall development of the country, the Minister of Transport, Mr Rotimi Ameachi, said, federal government will support the state in achieving the noble objective.

A statement by the Chief Press Secretary to the governor of Kano State, Abba Anwar revealed that the Minister who was represented by the Director Maritime Services of the Ministry, Auwalu Dauda Sulaiman during a special visit by the governor to Nigerian Shippers Council (NSC), Apapa, Lagos, Friday, said “The bold step taken by Kano under Dr Abdullahi Umar Ganduje on the Dry Port project, is not only commendable, but cannot come at the better time.”

“We are fully in support of this and we will do our best to see to the realisation of this signature project. Thank you so much Your Excellency for taking this bold step in the resuscitation of the project,” he commended.

In his remark’s governor Ganduje commended that, “I wish to appreciate the courage of the Nigerian Shippers Council for their initiative in promoting the establishment of Inland Dry Ports to make shipping services available to those of us in the hinterland.

It is a known fact that logistics are livewire for any economic pursuits. When goods are produced at any location, their values can only be realised when they get delivered to the ultimate user.”

Listing the importance of the project, he added that, the Inland Port would facilitate efficient handling of both import and export cargoes.

According to the statement, the governor further explained that, in Kano he assured that they should exploit all the opportunities offered by the facility and aggressively grow exports to boost Nigerian foreign exchange in addition to growing the state internally generated revenue.

To emphasize how his administration is working tirelessly for the realization of the signature project, he made it known to the gathering, at the Shippers Council that, “We had provided 200 hectares of virgin land free of encumbrances required for the integrated projects, that is the Inland Dry Port and the Special Economic Zone.”

Parts of the efforts signifying how serious the governor is about the project, he reveals that, the state constructed a standards dual carriage access road to the project site, provision of power and water to the site, and other essential support of propagating the project and promoting it both for marketing and obtaining support from appropriate quotas, particularly regulatory agencies, among others.

“We appreciate the importance or the Inland Dry Port to the Kano economy and also its importance to both neighbouring states in Nigeria and our neighbouring landlocked neighbors, like Republic of Niger, Chad, Northern Cameroon and the rest of Sahel Africa up to Mauritania,” he said.

The Executive Secretary/Chief Executive Officer of the Shippers Council, Hassan Bello, commended Kano state government for supporting the project, “Your Excellency we are grateful that you are supporting this project.”

“We are at the verge of getting a significant project of 30 billion Metric Tonne of Cargo. I also want assure His Excellency that a Task Team will come to Kano to see you Sir over this all-important project. Your display of commitment means a lot towards the realization of the project,” he commended.

At the meeting there was the presence of a team from Dala Inland Dry Port Company limited, under the leadership of the Managing Director/Chief Executive Officer, Ahmed Rabi’u, who appreciated governor Ganduje’s efforts in overhauling the state economy in a diverse way.

Acknowledging the good work of the company, governor Ganduje said “Dala Inland Dry Port Project has been a forerunner in the drive for the establishment of Inland Ports in Nigeria. And very well deserves the project. Our commitment as the host state government towards the actualization of the project is unparalleled.”

There was also the presence of Infrastructure Concession and Regulatory Commission (ICRC), when the Director General was represented at the occasion.

Immediately after the fruitful meeting the governor with his entourage proceeded to Ports and Cargo Services limited (PCAS), a subsidiary of SIFAX company, at Apapa, and was received by the Managing Director of the company, Mr John Jenkins.

Governor Ganduje urged the Managing Director that when the official launching of the Kano Dry Port, the state government would invite the company, which would pave way for working relationship between the state and the company in a near future.