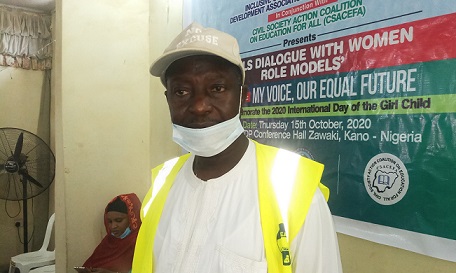 The girls dialogue with women role models mentoring meeting is to commemorate the theme, “My voice, Our Equal future” of the 2020 International day of the girl child.

The objectives of the meeting are; to formulate action plan about schooling and career, learn and be inspired by women role models with different life career experiences and identify and describe common barriers of girl’s education in their community including ways to overcome them.

Prof Muhammad Bello Shittu is the Team Leader, ICEADA, he said it is important to strengthen the voice of young girls by looking to women role models.

The meeting gives an opportunity for the girls to interact with women role models to share experiences and give them mentoring support, shed light and give clear direction regarding their educational careers.

“They successful women role models will also have the opportunity to learn, share and develop action plans for the future of the girls,” he added.

Prof Shittu explains that at the end of the day, the girls will be paired up with role models to reach out to them on their own free will for career guidance or mentoring while ICEADA will track progress that is being made.

The girls are encouraged to report to ICEADA where there are bottlenecks at home or school, ICEADA in turn will call on the women role models to intervene by going to talk to the parents of the girl at homes to settle the issue.

Some of the women role models at meeting are;

One of the role models, Barr Aisha Ali Tijjanisaid the event is overwhelming, it entails quite a lot of things.

“This is a great opportunity for mothers and children to learn together especially by way of inspiring and encouraging the girls, we were once like them,” she added.

Hajara Nuhu is a student at Government Girls Secondary School (GGSS), Zawaciki wants to be a medical doctor.

She said the chance meeting has given her the opportunity to express herself feelings for the first time about what she wants in life amongst people that would encourage her.

“This is going to make my dream come past,” she appreciates.

She said being among her equals and sharing experience freely with adults who have made it in live is an inspiration to her.

“I am going to make everybody in this room proud of me,” she bragged.

Successes of the initiative

According to Prof Shittu, these are the third set of girls to be supported and mentored by ICEADA.

Presently, ICEADA is mentoring over 35 secondary school students in seven states, six under graduate students in different universities across the country.

In the past, some girls enjoyed scholarship, many were supported to complete their secondary school education, some of which have graduated from universities and are pursuing careers of their choice.