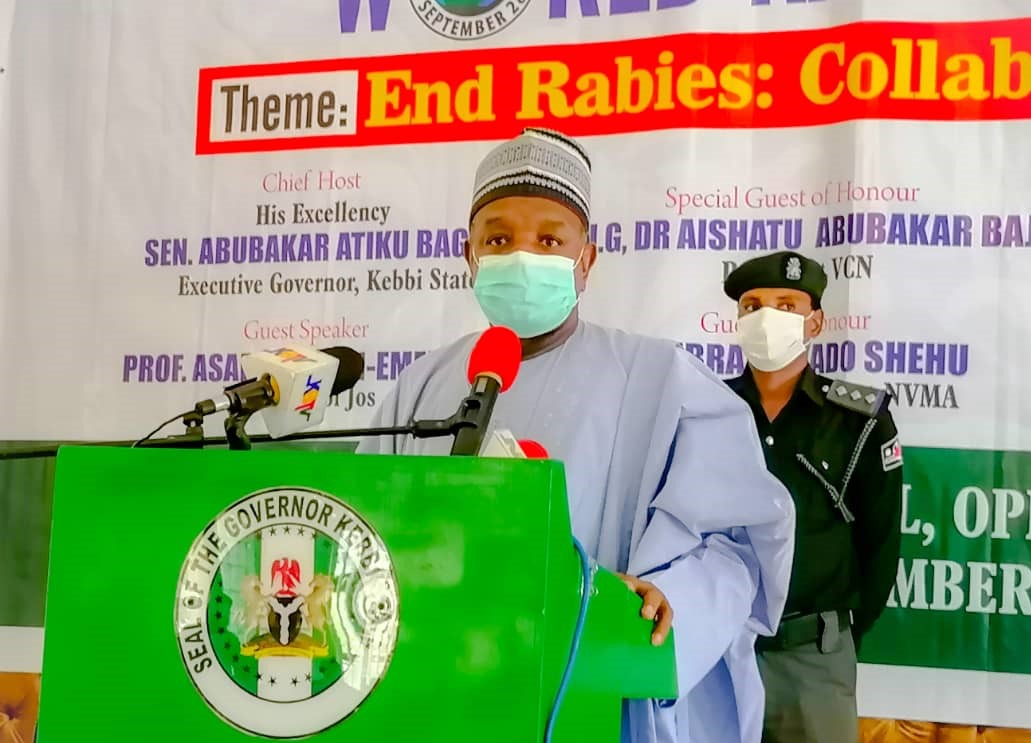 This was disclosed during the celebration of the World Rabies Day, with the theme, ” End Rabies: Collaborate, Vaccinate, “at the Presidential Banquet Hall, Birnin Kebbi.

According to the Governor, “Rabies may be something that the science hypothise to be transited from animals to humans.

“Yet, the focus should be on how to prevent rabies in animals themselves. This will surely help in combating the menace of the disease.”

Bagudu also stressed the need to preserve the balance of biodiversity, by behaving to meet it.

He also underscored the need to promote and preserve animals’ lives, as well as appreciate that,” our survival defends on the health of other species, especially animals.

“Animals lives matter too and the relationship between the humans and animals matter too.

“The failure to promote, preserve and make good use out of animals, has for instance resulted in conflicts, instead of economic huge benefits.”

Bagudu admonished that, everyone must appreciate the need to do more, while challenging Research Scientists to look for homegrown solutions to problems, for instance on rabies.

Bagudu added: “Scientists should turn some of the disadvantages’ to opportunities. We should lead in finding cures.

“The target of eliminating rabies by 2030 is good, but we should be in the forefront. We should show the world that we are confident.”

He stated that, the state was highly honoured to be given the hosting right of the epoch-making event.

Earlier, in his welcome address, the state Commissioner of Animal Health, Husbandry and Fisheries, Alhaji Aminu Garba Dandiga, said Kebbi State Government, through the Ministry, had vaccinated over 17, 200 dogs against rabies disease, out of the 40,000 dog’s population in the state.

He said that, there were 87 human involvements and 79 persons who received post exposure prophylaxis in 2019.

“Kebbi state has an estimation of over 40,000 dog population, out of which, 43 per cent had been vaccinated and there were 87 human involvements and 79 persons had received post exposure prophylaxis in 2019,” Dandiga said.

He said that, the state government, through the Ministry of Animal Health, Husbandry and Fisheries, had been in the forefront of the fight against diseases of livestock and companion animals.

“The most dreaded disease is rabies, especially as the state came under high attacks by high incidences of dog bites, some of which cases upon investigation were found to be positive for rabies,” he said.

Dandiga commended the efforts of Gov. Atiku Bagudu, especially the timely intervention and release of funds for rabies and Anthrax control and containment, among others.

He also commended the efforts of Veterinarians and in particular, the leadership and members of the NVMA in the state, for being constantly innovative and supporting the ministry in ensuring that government policies and programmes related to it succeeded

In her good will message, the National President of Veterinary Council of Nigeria, AIG, Aishatu Ababakar-Baju, said that thousands of people and animals still died from the rabies around the world daily despite the fact that, the disease is 100 vaccine – preventable.

According to her, the disease is most critical in developing and resource – deficient countries in Asia and Africa, including Nigeria.

She attributed the worsening situation to the lack of a well – structured, resource – supported, organised and effective rabies vaccination program in those countries, as well as low level of awareness and international collaboration on the disease control efforts.

“As Veterinarians, this year’s world celebration reminds us of the need to work towards , ending rabies in the next 10 years (2030), through raising awareness in our communities, states, country and globally; continue to collaborate at local, national and global levels to eliminate rabies keeping in mind that it is a disease that respects no borders,” she said.

She also enumerated the efforts of the VCN in providing adequate and sustainable regulatory framework, to enable animal healthcare practitioners to continue to provide the needed services and support to government at all levels, in ensuring healthy people and nation.

Highlights of the event was a Paper Presentation by Professor Asabe Dzikwi-Emennaa, University of Jos, conferment of an Award to the Governor for his outstanding contributions to the Veterinary Medical Association of Nigeria and the fight against Rabies, presented by the founder and CEO of War Against Rabies Foundation, Dr. G.S.N. Kia as well as Flagg off of the free vaccination exercise to dogs.