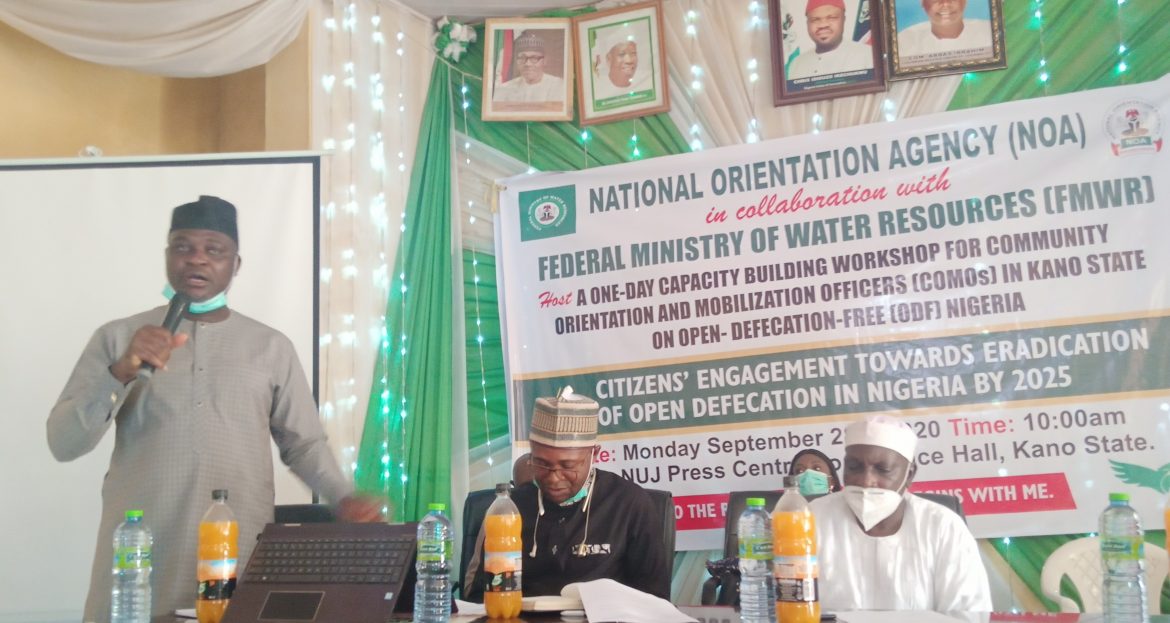 A recent global survey reveals that Nigeria has the highest number of persons defecating in the open space.

This was revealed by the Honorable Minister of Water Resources, Engr. Suleiman H. Adamu FNSE, who was represented by the Assistant Chief Scientific Officer of the Ministry, Mr. Abu Godwin Duniya in a 1- day capacity building workshop for Community Orientation Mobilization Officers (COMOs) on “open defecation free Nigeria by 2025” organized by National Orientation Agency (NOA) in collaboration with the Federal Ministry of Water Resources (FMWR) held at the Press Center, Nigeria Union of Journalists, Kano Council on 28th September, 2020.

Open defecation or ODF is a common human practice of defecating in an open space like fields, bushes, forests, ditches, streets, river, canals or other open space for defecation rather than using a toilet.

The Honorable Minister said the National Program to End Open Defecation in Nigeria tagged “Clean Nigeria: Use the Toilet Campaign” was approved by the Federal Executive Council (FEC) in May 2019 to address the unfortunate position Nigeria found herself, as the country with the highest number of persons defecating in the open globally”.

According to the 2019 water, Sanitation and Hygiene National Outcome Routine Mapping (WASH NORM) report, about a quarter of the population, estimated to 46 million people are involved in this act, he added.

Engr Adamu further explained that besides the exposure to diseases, lack of dignity and inconveniences experienced when practicing open defecation due to non-availability of sanitation facilities, women and girls especially, are exposed to violence, including rape, when they have to go out at night to defecate in the open. Other negative impact includes poor educational outcome and loss of productivity.

The Minister said the Clean Nigeria Campaign is aimed at implementing the National Roadmap towards making Nigeria Open Defecation free (ODF) by 2025 and was launched and flagged off by the Vice President, Prof. Yemi Osinbajo on 19th November 2019.

President Buhari signed the Executive order 009 on Open Defecation Free Nigeria by 2025 and Other Related Matters on 20th November 2019, to give effect to the Campaign, he added.

He stressed that ending Open defecation is not just about access to toilets. It is also about generating demand for toilets and changing people’s behaviour regarding toilet usage.

He sustained, that “The Clean Nigeria Campaign is a transformational and behaviour change Campaign which seeks to mobilize high level political support, resources and the entire populace towards building a new culture of safe sanitation”.

“This will require the contribution and commitment of everyone: Government at all levels, Civil Society, Private Sector, Development Partners and the entire Populace”, he added.

He also recognized the important role of the National Orientation Agency in achieving the “defecation free Nigeria” and charged the agency to mobilize and sensitize Nigerians, saying “We will be leveraging on the nationwide structure of NOA through the Communication Orientation and Mobilization Officers (COMOs) who will be engaged in the dissemination of the key messages of the Clean Nigeria Campaign”.

I am glad to stress that the cost benefit of investing in sanitation, health, economic and education sectors cannot be overemphasized as it will reduce diarrhea diseases among children, increased school attendance, reduce health care cost and increased job creation for sanitation services will contribute to economic growth and development of the country.

He said making Nigeria Open Defecation Free is everyone’s business, there is need for strong multi-stakeholder’s coordination and collaboration to drive the sanitation and hygiene agenda in the country towards meeting the national target of ending open defecation by 2025 and achieving the Sustainable Development Goal (SDG) 6 for Water and Sanitation.

And charged COMOs to be frontline Ambassadors for the ‘Clean Nigeria: Use the Toilet Campaign”.

In his remarks, the Chief Program Officer, National Orientation Agency, Mr Simon Idoko said open defecation is a global issue with its attendant negative impact on the population and well-being of everybody; talking about typhoid, diarrhea, hepatitis and all other diseases that are sanitation and water borne.

He said a report reveals that over 44,000 children die in Nigeria annually as a result of diarrhea related diseases.

Mr Idoko also revealed that 4 years ago, the United Nations Education, Scientific, and Cultural Organization (UNICEF) ranked Nigeria 4th after India, Pakistan and Indonesia but today, it is being reported that Nigeria is 1st on the world ranking of open defecation countries.

That ranking, he said is what led the FMWR to come up with a National Road map towards ending open defecation in Nigeria by 2025 in line with the United Nations (UN) global campaign. “The road map shows clearly and provides a guide towards addressing open defecation free Nigeria using a mix of approaches such as capacity development, provision of sanitation facilities in public places, community led sanitation, promotional and media campaign, partnership and coordination among other strategies”, Idoko added.

He said the workshop is one step in the whole process and a flow out the presidential executive order 009 which was signed by the president. It gave the FMWR the needed impetus backing and mandate to work with other MDAs CSOs to commence the clean Nigeria campaign tagged “making Nigeria open defecation free by 2025”.

The Program Officer revealed that NOA had its first public appearance with FMWR through a partnership leading to a joint press conference on 25th July, 2020; though NOA has been working closely with the FMWR in the last three years.

Mr. Idoko further stated that the event is a continuation of the phasal implementation of the nationwide capacity building for COMOs on ODF which commenced earlier in September, 2020 in about 13 other states, saying that the second phase has Kano and other 25 states.

He said the well-defined the role of COMOs is community led mobilization to achieve the set goal, therefore, COMOs will bring on board their social mobilization and public enlightenment skills using a variety of approaches and initiative including town announcements, focus group discussions, road shows, motorized campaigns, gender for development, advocacy, distribution of IEC materials and other strategies used in communicating government policies to the public as part of their routine efforts.

Speaking to participants at the workshop, the Managing Director, Kano State Rural Water and Sanitation Agency (RUWASA), Comrade Ibrahim Salisu Bichi said it is very unfortunate that Nigeria is number 1 in the global ranking and Kano state is 1st in National raking. “we are working tirelessly to see that our communities are free from open defecation”, he added.

He said the state government has already provided all necessary requirements to keep 4,000 communities clean and free from ODF.

In his remarks, the United Nations International Children’s Fund (UNICEF) Field Officer, Mr. Rafid Adbul’aziz drew the attention of participants to the fact that 1$ invested in Water, Sanitation and Hygiene (WASH) is equivalent to saving 4$ in the economy, saying “one gram of feaces can contain 10,000,000 virus, 1,000,000 bacterial, 1,000 parasitic cysts and 100 parasitic eggs”.

He warned that though Nigeria was recently certified “Polio Free” by the World Health Organization (WHO); Polio is WASH related disease and can reemerge if ODF is not stopped.

Mr Abdul’aziz also revealed that Diarrhea is a leading killer of under 5 children (8% of all Under 5 deaths), 480,00 children per year. Almost 60% attributed to unsafe drinking water and can cause intestinal worm infections, typhoid, cholera, hepatitis, polio, trachoma, and

Earlier, in his welcome address, NOA State Director, Kano, Alh Lawal Haruna said the issue of ODF concerns everybody because the health of a nation is of paramount importance as no development can be achieved with unhealthy members of any community.

“Good health precedes the development of any society, state or country”, he added.

He urged COMOs to pay good attention to the presentations during the technical session of the capacity building workshop so as to be well informed and equipped with the necessary knowledge required for the “Clean Nigeria: Use the Toilet Campaign”.