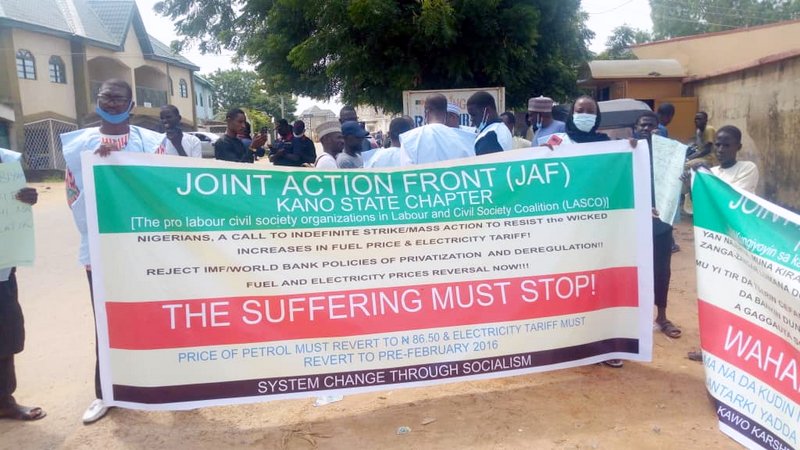 Thousands of youths who poured out to protest against the recent hike in price of petrol and electricity tariffs have been chased away by heavily armed security operatives in Kano, Tuesday morning, 22/09/2020

The protest was organized by Civil Society Organisation, Joint Action Forum (JAF), starting in front of the premises of the Nigerian Union of Journalists (NUJ) along Farm Center Road, Kano

Heavy presence of armed security men (police, DSS and NCDC) stopped the group and other young people from staging their protest in the metropolis.

In a statement signed by JAF Chairman, Dr Musa Bashir, and Secretary, Abba Bello Ahmed, the group called on the Federal Government to reverse the price of fuel from N160:00 to the 2012 price of N86:00 and to also reverse the increases in electricity tariffs and Value Added Tax (VAT).

“Immediate and unconditional reversal of the hike in petrol price from the current N160:00 to the N86:50 price of 2012, and reversal of the increase in electricity tariffs and VAT.

“The government has the responsibility to make our refineries work and build new ones in order to ensure availability of petroleum products at cheaper and affordable prices.

According to the statement, government should re-engineering of the security apparatus to ensure organised crimes such as terrorism, banditry, kidnapping and armed robbery are reduced to the barest minimum if not curtailed.

CSO Coalition to Unveil Most Transparent Public Institutions in Nigeria

Kano Deputy Governor Not Under Probe