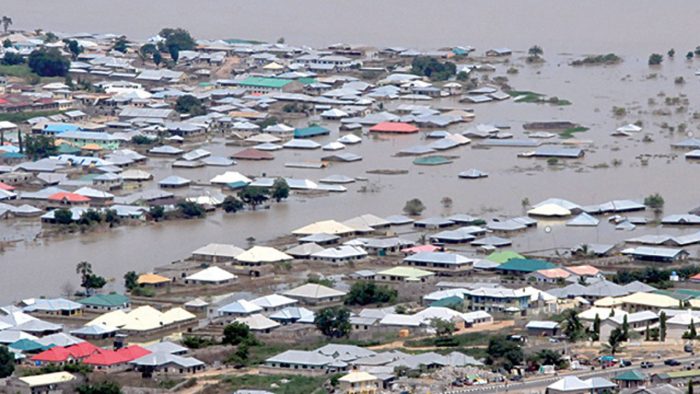 About seventy communities in Kogi State have been submerged by flood due to River Niger overflowing its bank, resulting to over 50,000 people being displaced in different parts of the State.

Mr Ibrahim Abdullahi, who is also the Desk Officer in charge of ecological and emergency matters in Kogi Local Government Council, said 66 communities had been submerged by flood in the area.

He said over 50,000 people have been forced to evacuate their houses to seek accommodation in schools and other makeshift buildings.

He said that some of the victims in Edeha and Koton Karfe communities had been sleeping on open surfaces or roads co-habiting with dangerous reptiles.

He called for urgent intervention from the State Government and the National Emergency Management Agency (NEMA).

He said the death of a 17-year-old Michael Egwuaba, has been recorded since the floods started, but that the number could rise if urgent measures were not put in place to mitigate the effect of the disaster on the people.

The situation is worst in communities of Egan, Konami, Buzih, Ebwa, Even, Lagan Budan, and Gbuje where residents have been forced to relocate to the neighbouring Niger State.

Earlier, Gov. Yahaya Bello said substantial amount of money had been released to purchase drugs, food, water and other relief materials for the victims.

Gov Bello who was represented by his deputy, Chief Edward Onoja, directed that 21,000 youths recently engaged under the Federal Government’s public works programme be deployed to help in the rescue operation.

The NEMA Director in charge of training, Mr Mohammed Usman, said that incessant flooding had become a serious threat to the country’s efforts at becoming self sufficient in food production.

Usman said that nine local government areas in Kogi were among the 102 in the country that had been identified as highly probable risk areas for flooding in 2020.

He called on the state government to urgently take preventive and mitigative measures to reduce the impact of the flood on people and the economy of the state.

He said that NEMA would also, in line with the Federal Government’s directive, assist the victims to go back to their homes and farms as soon as possible.

Mr Julius Mejayan, Executive Secretary, KOSEMA, said highlands in the state have been identified as being prone to the disaster.

Some of the council areas that are likely to be affected by flooding in the coming days are Bassa, Lokoja, Kogi, Omala, Idah, Ibaji, Dekina, Ofu and Igala-mela.

May Allah protect and help my people in kogi state Amen