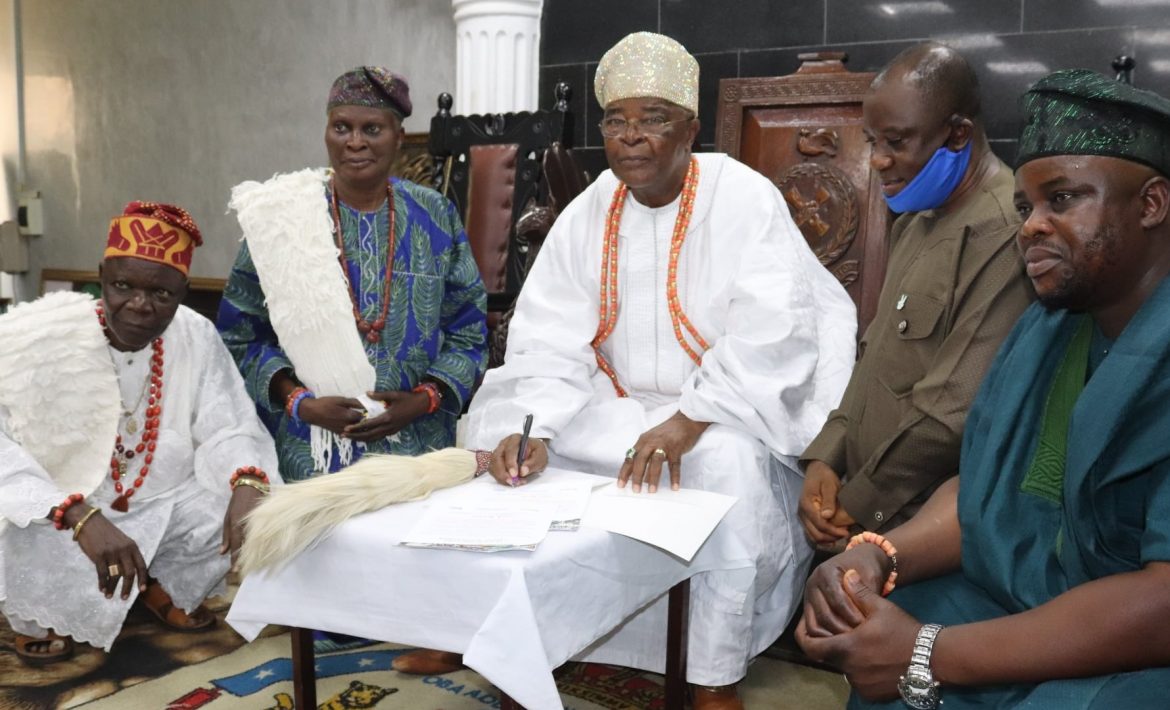 The historic city of Abeokuta, Capital of Ogun State, South West, Nigeria, has become the first city in Nigeria to sign into the global peace building initiative with the theme: ‘Peace in Our Cities’ (PiOC).

His Royal Majesty, Paramount ruler and the Alake of Egbaland, Oba Adedotun Aremu Gbadebo CFR, performed the official endorsement of the global campaign being promoted by 22 international and local Non-Governmental Organisations under a global coalition known as +PEACE, on Friday, 11th of September, 2020 at Ake Palace in Abeokuta, thereby enlisting the City, as one of the members of the global project which was launched in September, 2019.

The signing of the PiOC document by the Oba Gbadebo, which was presented to him for endorsement by Dr. Michel Femi Sodipo, project coordinator, Peace Initiative Network (PIN), a Nigerian peacebuilding NGO, who is one of the global coalition of NGOs driving the campaign, commits the City of Abeokuta, to a city –to -city partnership design to reduce and transform urban violence world –wide.

The endorsement implies an official approval that the City of Abeokuta is now a signatory to the initiative designed to help the world achieve the global development goals, specifically, Sustainable Development Goal 16.1, to significantly reduce all forms of violence, and help advance other targets on peaceful, just, and inclusive societies (SDG16+).

Based on this development, Abeokuta is now one of the 17 ‘early adopter’ cities on board of the global project, like the C40 Cities Climate leadership Group, the PiOC seeks to become a preeminent organizing body that is uniting cities and local leaders to collaborate on city –level solutions to pressing global problems.

Peace in Our Cities is a growing group of mayors and civil society organizations committed to significantly reducing levels of violence globally and building peaceful, just, and inclusive cities, in line with the commitments made in the 2030 Agenda for Sustainable Development.

PiOC focuses on catalysing actions to reduce violence and build peace, leveraging the political power of Mayors, the community power of civil society, and the global imperative of the Sustainable Development Goals (SDGs).

The year 2030 was chosen as a key benchmark as it represents the conclusion of the UN Secretary General’s Decade of Action on the 2030 Agenda. Marking 10 years from today, Peace in Our Cities is setting a “high ambition timeline” critical to achieving SDG16, SDG5, and SDG11 to build peaceful, just and inclusive societies, end all forms of violence against women and girls, and make cities safer and more inclusive

Our city partners cover thirteen countries, over twenty million people and feature cities with violence priorities ranging from homicide levels to violence against women, from group violence to economic violence.

Benefits accruable to member cities: Work with city partner to identify their violence priorities and commit to making 50% reduction in these forms of violence over the coming decade, to work with partner cities in addressing the most serious violence challenges taking place across cities in the world today.

It has been identified that many cities have low homicide rates, but struggle with other serious violence challenges, such as high levels of violence against women. Similarly, many cities with high homicide also are struggling to confront violations of individual and community safety. By focusing on the relevant serious violence challenges for each participating city, through being both locally responsive and globally supportive.

The campaign will be offering counselling and exchange experiences regarding these issues to partnering cities.

One of the services to be provided to partnering cities is evidence-based briefs, second is monthly webinars, exchange opportunities, political events that advance awareness of what a particular city is doing (i.e. with World Bank, UN, other international conferences and events for Mayors, Civil Society and others involved), and funding incentive to support violence reduction and peace building.