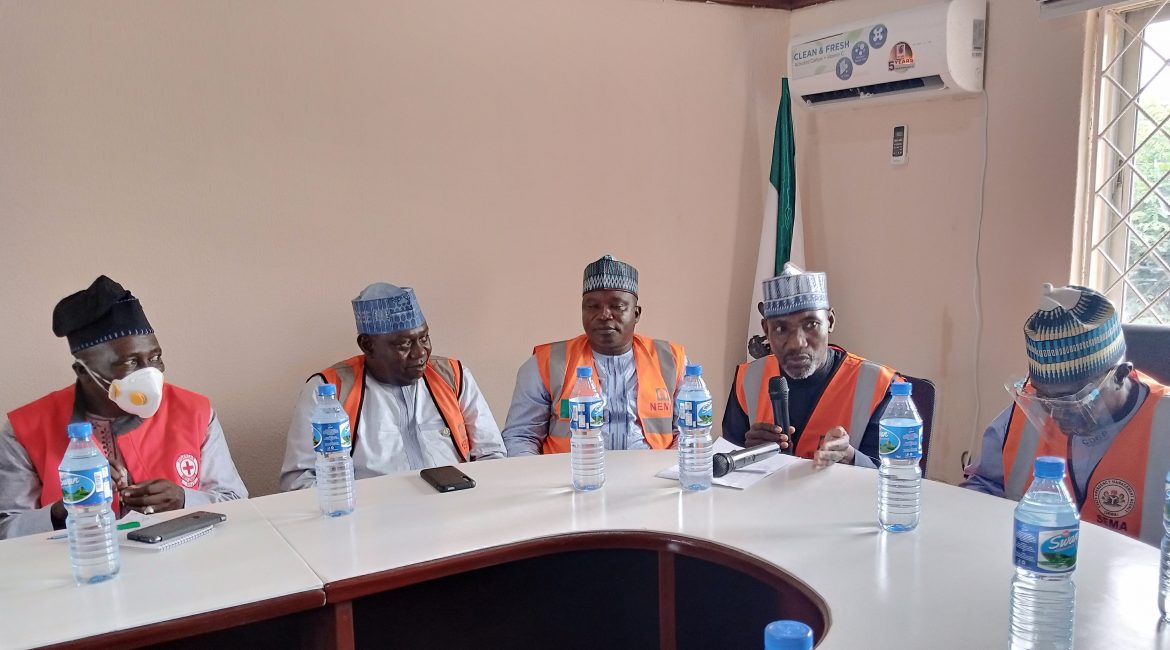 The disclosure was made during the National emergency Management Agency (NEMA) advocacy visit on 2020 flood to SEMA.

Dr Jilli said since he assumed office, the agency has been making efforts to ensure that it answers its name by ensuring that all stakeholders are involved in providing emergency response in the state through establishment of stakeholders committee.

The agency participated actively during the Covid-19 pandemic in two separate committees; the task force committee and the Fund raising committee. SEMA also took   part in the collection of funds and distribution of palliatives and other relief materials during the lock down, he added.

He further disclosed that the SEMA collaborated with other stakeholders including Red Cross, Ministry of Environment, Ministry of Information and the National Orientation Agency (NOA) organized sensitization programs to enlighten people on how to prevent the spread of Covid-19.

Dr. Jilli said since the beginning of the rainfall this year, SEMA has been engaged in serious campaigns sensitizing the public on flooding following the warning by the Nigerian Meteorological Agency (NiMET) that 20 local government areas would experience flooding.

“We embarked on intensive campaign to intimate the general public on the dangers and consequences of the rainfall”, the task force set up with NEMA visited the five Emirate Councils on the flood advocacy and sensitization”, he added.

In they Emirates, he said district heads, ward heads and village heads were directed to ensure the information gets down to their respective communities and also to mobilize community members to clear drainage and water ways for safe passage of rainfall.

SEMA and other stakeholders visited areas affected by the flooding, rainstorm, fire disaster and farm flood to assess the extend of damage and record it for onward transmission to the Governor and NEMA to provide relief materials to the victims, even though, the assessment is still ongoing, he added.

Dr Jilli said SEMA has a cordial relationship with all stakeholders and national outreach in the state.

He also said SEMA has a good synergy with NEMA National Headquarters, Refugee Commission and Ministry of Humanitarian Affairs, Disaster Management and Social Development and Presidential Task force on disaster relief and rehabilitation, and have equally established synergy with civil society organizations and non-governmental organizations related to disaster rapid control management in the state.

Dr Jilli disclosed that the reason why Kano does not have IDP camp is attributed to culture, religion and tradition of the people of Kano, they do not want accommodation in schools or IDP camps, rather, they gather to take shelter with relatives or rent accommodation.

He therefore called on NEMA to ensure that flood victims are provided with relief materials in good time to contribute effectively to speedy recovery.

Responding, Nura Bappa Aliyu, Director Special Duties NEMA Headquarters who represented the Director General NEMA, AVM Muhammadu A Muhammadu (Rtd), said the advocacy team was in Kano to reinforce the existing collaboration between NEMA and other stakeholders, to access the level of preparedness of individual organizations mandate with respect to flood and to hear of challenges encountered or envisaged in the cause of preparing for emergencies in the state.

Stakeholders at the meeting expressed their challenges in preparing and responding to emergencies.

Alh Musa Abdullahi, the Executive Secretary, Nigerian Red Cross, Kano said on the ongoing flood disaster, volunteers are working in different communities and reporting the situation, so far, they have forwarded the report of 19 LGAs to NEMA.

Abdullahi said the major challenges are security of the displaced persons, refusal to stay in IDP camp provided by government, issues of feeding and health that needs urgent attention; these items are not readily available, he added.

The executive Director, Adolescent Health Information Project (AHIP), Hajia Mairo Bello said the major challenge facing SEMA is funding; to stop other stakeholders from taking the rightful place of the agency, funds and relief materials must directly be channel to it, she added.