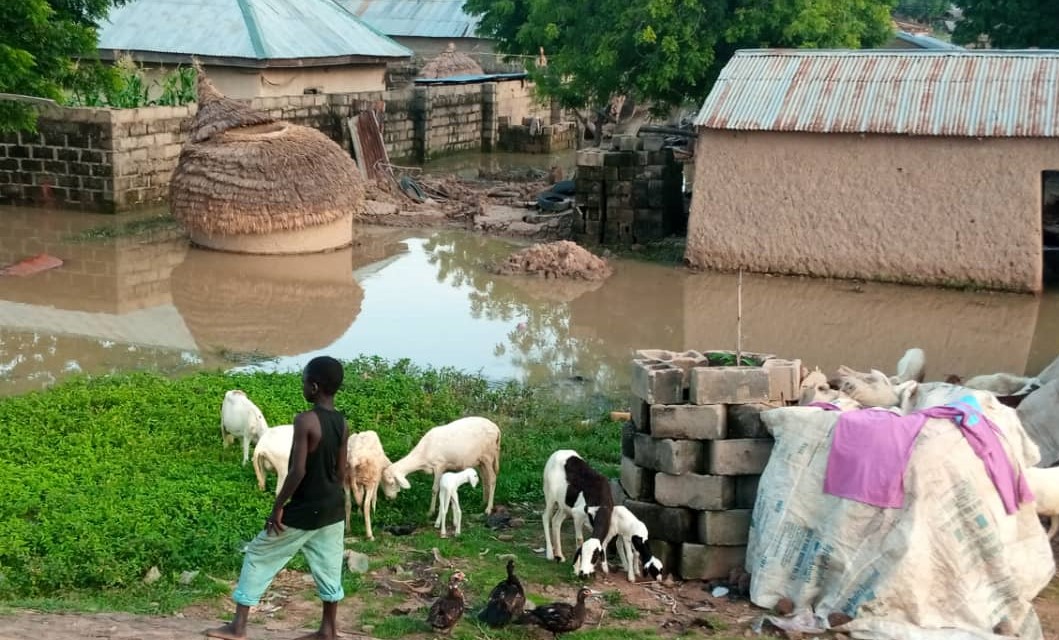 Governor Abubakar Atiku Bagudu has directed the  immediate provision of food, water and construction of additional toilets to displaced people affected by  floods in Bagudo local government area of Kebbi.

Addressing hundreds of flood victims at Bagudo Kudu Primary School, Governor Bagudu commiserated with the victims over the terrible situation.

The Governor said state government will assist flood victims, across the state, to rebuild their houses destroyed by the disasters.

According to him, the state government will however relocate other victims who cannot rebuild their former houses even when the flood waters recede.

He said the visit was to show sympathy to the flood victims, as well as pray fervently to Almighty Allah to prevent the recurrence of the unpalatable disasters.

Bagudu also expressed concern that, the victims were displaced sequel to the unforeseen and uncontrollable natural phenomenon of flood.

He said’ ” We are all concerned with your inevitable plight and President Muhammadu Buhari is sympathizing with all of you.

” We are all in it. It is a collective loss and concerned, but;the state government will do everything  possible to alleviate your suffering”

” You should all be patient and fervently prayerful, nothing will be enough, but, we will try our best to flood victims, across the state.”

Bagudu therefore directed the Chairman of the area to immediately provide adequate potable water, toilet , sanitation and health facilities to the IDPs.

the state government will strive to prevent the outbreak of waterborne and communicable diseases, just as he urged women to always boil water before drinking it.

He also directed the local government with women leaders to identify the special needs of women like domestic items, as well as other peculiar needs of women and children .

“We will strive to provide all your immediate needs, while arrangements are also on by SEMA and the local governments to provide your long term needs.

“These disasters are trials from the Almighty Allah, but, we will surmount these challenges with absolute prayers and patience ,” Bagudu, added.

A spokesperson of the victims, Hajiya Kulu Koshe, commended the Governor for the visit, saying that, the gesture was extremely consoling and heart warming .

She enumerated some of the affected communities whose residents where taking refuge in the camp  include: Soshiya, new and old, Tungar Baushe, Saki Jiki, Rani and Maizago, among others.

According to her, she lamented,”all our houses had been destroyed,and all our  farmlands too had been completely submerged” .

The floods has also rendered many community people homeless, while the the general hospital, main market shops and many houses in Bagudo town  have collapsed.