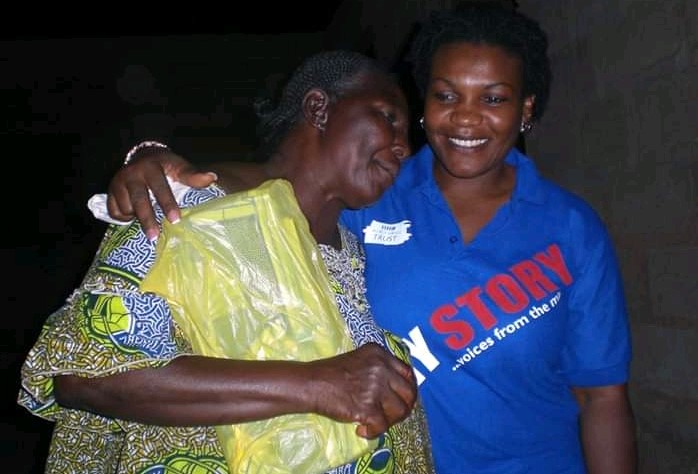 Colorful and beautifully decorated Cakes are a delight at any birthday any day.

And friends have often teased others about a piece of their birthday cakes for many years. This has been a birthday tradition for over many centuries.

But, one person has broken tradition for a birthday celebration.

Aveseh Asough, a renowned journalist and lover of nature has been known for a different kind of celebration for her birthday every year. She doesn’t cut Cake!

Aveseh Asough, under the Hashtag #My1Extra, collects Slippers and other items, distributes them to children in different villages each year.

Explaining the concept of #My1Extra, Aveseh Asough told me that she started this project to honor her parents and emulate what they practiced at home while she was growing up. Aveseh said, “in our family, my mum had a practice where she always kept that 1 extra plate of food at every meal, which she called dyuu keng ker hwange…” That extra plate of food was meant for the unknown visitor.

Aveseh would later adopt this as her own way of reaching out to share some love on her birthday to some under privileged people in society.

My1 Extra started in 2010 when Aveseh took time to visit her birth place in Gboko South in Benue state, and paid home visits to all her mothers in Gboko South. She explained that while growing up in Gboko South, “as kids, we had more than our birth mothers as mothers. Every Mama in your area was your mum, and if you misbehaved, any of them wouldn’t wait for your birth mum before punishing you. They also loved us equally as well”

Since 2010, Aveseh and her team of #My1Extra, led by Samson Orvainya, the logistic person, with support from free spirited individual contributors, have had different outings. At one time, the team served lunched to school pupils of a local government primary school in Ijah Gbagyi in Niger state, at another, Slippers and other items at a village close to the Airport in Abuja. Other outings have been when the team served lunch packs and drinks to service corps on duty in the FCT. The team was also spotted serving tea and bread on another outing to street sweepers in the FCT.

In 2018 in collaboration with ASKiNG RADiO, the team had a moonlit cultural Night of village entertainment in Ushongo local government of Benue State and in 2019, the team went sharing slippers to children in Gwer West local government areas of Benue state.

Location selection is often done through recommendation and voting by an impartial and independent pool.

You are all invited

We all need somebody to lean on 👍

Thanks you for remembering the kids and the less privileged may the good lord bless you.
Keep it on Aveseh