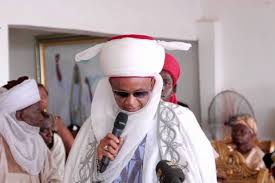 The Etsu Nupe in Niger state Dr Yahaya Abubakar on Tuesday received the emir of Kano Alhaji Aminu Ado Bayero in his continued familiarization visit to monarchs across the federation.

To make the historic visit   more colourful and attractive, a mini durbar was organized by the Nupe emirate in honour of their August visitor, the Emir of Kano Alhaji Aminu Ado Bayero.

The Nupe community received the Emir with open hand as they demonstrated their love and affection to him as well as cheering in a jubilation mood where ever he passed through.

While at the palace, the chief host who doubles as Etsu of Nupe land Dr Yahaya Abubakar described the visit as one of the most historic, unique and remain ever in the minds of Nupe community.

The Etsu Nupe narrated the long existing cordial ties between the two Emirates and pledged to do everything possible within his allotted power to make the relationship wax stronger.

Dr Yahaya Abubakar used the medium in congratulating the visitor and advised him to apply his vast experience in reviving the lost glory of traditional institutions especially in northern part of the country.

Earlier, the Emir of Kano Alhaji Aminu Ado Bayero expressed delight with the way and manner he was received by his host, particularly the Etsu of Nupe Brigadier General Dr Yahaya Abubakar.

Alhaji Aminu Ado Bayero said the familiarization tour was earlier scheduled but cannot to make it as a result of covid-19 pandemic.

The Emir has solicited the support and cooperation from the entire emirs in the northern region and country at large so as to attained objectives of resuscitating the Traditional institutions.

During the visit, the Kano monarch was accompanied by some of the Emirate’s council members and the Chief of Staff to the Emirate who doubles as the Sarkin Dawakin Tsakar Gida Alhaji Ahmad Ado Bayero among other Traditional title holders.