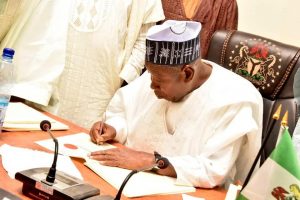 Governor Abdullahi Umar Ganduje OFR has administered the oath of office and allegiance on six Judges for the Kano State High Court.

The Attorney General of the state, Mr Muhammad Lawal, sworn in the new judge.

According to Gov. Ganduje all the new judges were sworn in based on their individual merit and competence, having passed the accreditation tests and ‎recommendations of the National Judicial Council (NJC). Their appointment would increase the number of judges and ensure quick dispensation of justice and fair hearing in the state, he added. ‎

He said that the three arms of government would cooperate and work in synergy for the common good of the people of the state.‎ ‎

He urged them to maintain the credibility of the judiciary and also continue to uphold its dignity. ‎

The Governor also swore in Alhaji Aminu Bahaushe‎ as Permanent Secretary and deployed him to the Ministry for Housing and Transport.

Why North is Backward in Education – Report.