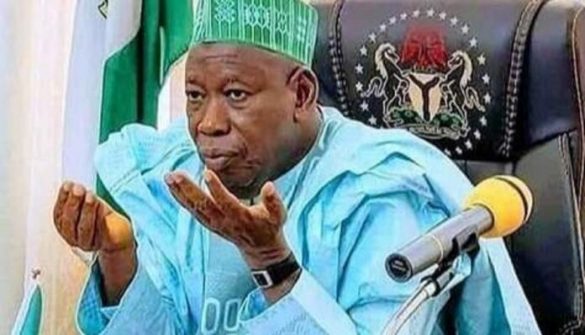 Kano state governor Dr. Abdullahi Umar Ganduje OFR has said the state government has accepted the death sentence verdict and the rule of law surrounding the case. “I will not waste time in signing the warrant for the execution of the man who blasphemed our Holy Prophet of Islam.

According to him “What happened is so important to the state and to the security of the state and the nation in general. What the Court did is absolutely right. And we support it completely as such kind of irresponsible act, if not because of the state power, nobody could know what would happen in the future,” he reminded.

Governor Ganduje made his government stand known at a special meeting, was held at Africa House, Government House, Kano, Thursday.

He noted that the judgement was based on Section 382 (b) of Kano Shari’ah Penal Code of 2000 and also commended how the Court that handled the case and commended all sections of the society for not fomenting trouble when the case was in the court, adding that, “Our eyes are there following everything bit by bit. We thank Almighty Allah, that the court sitting went on successfully.”

Dr Abdullahi Umar Ganduje further explained that the man who did that, confessed to be a follower of a particular Islamic Sect. But the adherents of those Sect rejected him right away. So, we need to understand the importance of this judgement. We are lucky that Scholars maintained that it wasn’t a case for a particular Sect, but rather of one who just decided to derail.”

Professor Ahmad Murtala from Bayero University, Kano, lend his voice to all those scholars who support the execution of the person involved in the blasphemy act. He hinted that accepting the judgement would strengthen courts in the state and would also mean respecting Kano people and their religious rights.

MULAN Chairman Kano State Branch, Barrister Muhammad Sani Garba, reveals that their association would stand very firm behind Governor’s stand on approving the judgement. Adding that, even if the case goes to Supreme Court, nothing could change.

NBA Chairman Kano State Branch Barrister Aminu Sani Gadanya, said as an association, they collectively accepted the verdict of the Court, “Looking at the legal provisions followed by the Court. We are supporting this judgement 100 percent.”

Comptroller Nigeria Correctional Centre, Kano, reminded all about other procedures to be followed before the judgement could be executed lastly. Mentioning that, “The Law gives the victim the right to take the matter to the High Court to Court of Appeal up to Supreme Court. Just as being said by the Chairman of NBA, Kano state.”

Other people who spoke at the meeting included the state Commissioner of Religious Affairs. The Imam of Triumph Friday Mosque, Malam Lawan Abubakar reminded how people should try their best in discharging their individual responsibilities on the matter.

Sheikh Qariballah Sheikh Nasiru Kabara, the leader of Qadiriyyah in West Africa, who was represented by Dr Ibrahim Matabuli Kabara, commended the governor for being concerned about the issue that affects the dignity of the Holy Prophet of Islam, Muhammad Bin Abdullah, Peace and Blessings of Allahu be on Him.