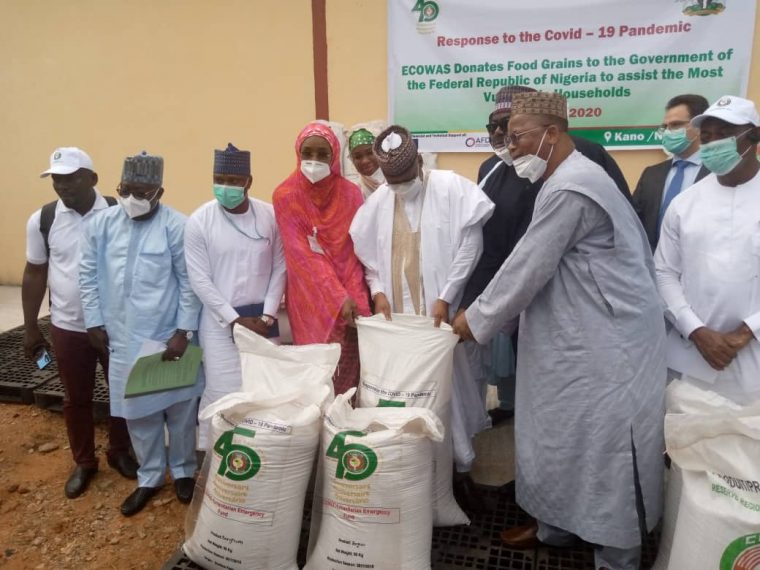 The Economic Community of West Africa (ECOWAS) Commission has donated about 4,000 tons of grains to the Federal Government for distribution to vulnerable households, in order to mitigate the effects of the COVID-19 pandemic.

The ECOWAS Commissioner of Agriculture, Water Resources and Environment, Sangare Sekou, disclosed this at the presentation of the items to the Federal Government yesterday in Kano.

According to him   the first donation consists of 1,196 tonnes of cereals financed by the ECOWAS Commission’s Humanitarian Emergency Fund for Disaster and Emergency Relief to Member States affected by a humanitarian crisis while the second donation of 2,803 tonnes is funded by the resources of the Regional Food Security Storage Support Project, which the European Union is financing for a total amount of €56 million.

Mr Sangare Sekou noted that the gesture was to demonstrate the region’s solidarity with the government and people of Nigeria, adding that this regional solidarity will be demonstrated through food donations of a total quantity of 3,999 tonnes of cereals comprising of millet and sorghum.

“The grains will be taken from the stocks in the ECOWAS Regional Food Security Reserve, partly warehoused with the Federal Strategic Reserve Department (FSRD) and distributed free of charge to the households mostly affected by the humanitarian situation in the country.”

In a remark, Hajiya Sadiya Umar-Farouq, the Minister of Humanitarian Affairs, Disaster Management and Social Development, said the Federal Government had distributed 70,000 tonnes of food items to deserving households in the country.

She said the food items were supplied by the Federal Ministry of Agriculture and Rural Development under the National Strategic Food Reserve.

Sadiya Umar-Farouq, further said Federal government also implemented Conditional Cash transfer and loans to vulnerable families and market women to mitigate their sufferings occasioned by the COVID-19 pandemic, added that about 15 million Nigerians were captured under the Social Register, to mobilize participation in the National Social Investment Program.

While lauding ECOWAS for the distribution of livestock to households in Kebbi State, Dada pledged continued support to the commission.

I hope it reaches those who truly need the stuff, not those who collect and sell off cos they already have enough.

Wow…what an effort in futility! The food is already gone to line politicians stores and kitchens…who did this to us ?

The food is gone! Politicians and their cronies have it all.what an effort in futility