NUJ, NOA to Increase Sensitization on Rape and Covid-19 in Kano 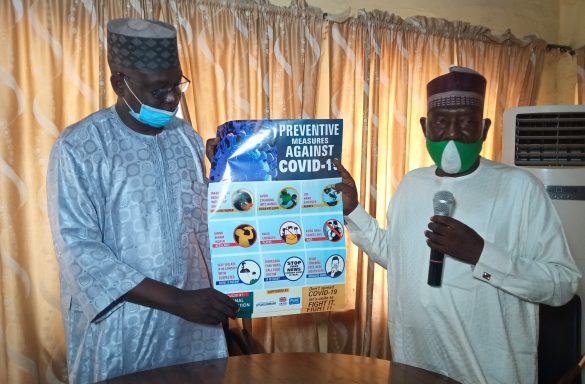 In his remarks, the Director, Mal. Lawal Haruna Makarfi commended the Council Chairman for doing a good job.

Makarfi said he was at the council secretariat to increase efforts on enlightening citizens to act in positive ways through the dissemination of information from Federal, State, Local government and to the grass root areas within the shortest possible time using the media.

“I am expected to work hand-hand with NUJ as major stakeholders, without which the agency’s work will not be possible”, he added.

I am here, also on advocacy visit on Covid-19 sensitization. “now that our borders, markets, worship centers are opened, people are assuming that Covid-19 is gone”, that is why I am here for us to re-strategize our efforts in curbing the pandemic”, he added.

Covid-19 still exists, and according to scientists, there could be a second round of the pandemic. If it occurs, we don’t want to be caught unaware as it was in the first case”. We want to be proactive, he added.

He also expressed dismay on the rising cases of rape in Kano and called on the union to give more attention to the issue.

Makarfi concluded his remarks by handing over large number Covid-19 sensitization posters and fliers to the council chairman for distribution.

Comrade Abbas quoted a section of the Constitution, said “section 22 of the constitution of the Federal Republic of Nigeria gives us the mandate to serve as the watch dogs of the society, we are charged to hold government accountable to the people”, so we are the searchlight, I assure you of wider media coverage of the agency’s programs and activities in the state, he added.

He said “we will work hand in hand with NOA, but the fact that the agency is not well funded is a challenge”.

“I will use this opportunity to call on the authority concerned to support the agency because sensitization plays a significant role in reorientation, especially with the realities of the changing world, without funding, it cannot be achieved”. We are aware of your issues and efforts, definitely, you need funds, he added.

Comrade Abbas who is also a member of the working committee, drafting a memorandum against rape and gender-based violence assured NOA that, RAPE campaign will be given wider publicity by all media outfits in Kano.