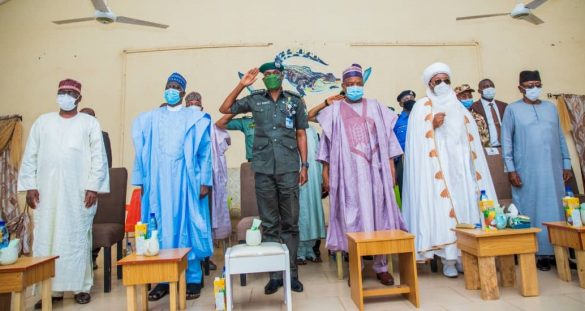 The Inspector General of Police (IGP), Mohammed Adamu, says the lingering banditry in the North-West and North-Central Nigeria has international dimension.

Adamu disclosed this during a town-hall meeting on peace and security held in Zuru, Local Government Area of Kebbi State.

The IGP laments that most of the banditry has international dimension. The bandits come from outside the country. We arrested Sudanese, Nigeriens and Malians, among other nationals.

According to him, “We also believe that because of what is happening in the North-East and the fact that the military troops are doing a great job in the fight against insurgency there, most of the bandits are running toward the North-West of the country and we have evidence.

“When we operated in Kaduna, Birnin Gwari, where we attacked a group of bandits, we realized that most of them came from Islamic State of West Africa, who are terrorists, and kidnapping for ransom.

“So, the issue is not at the level you are looking at it, it is a big issue and we must work together to address it,” he stated.

“This is why President Muhammadu Buhari does not rest because of these complaints coming from the North-West and North-Central on banditry,” the IGP said.

He said he came with a high-powered delegation, comprising the heads of intelligent community in the country.

“This is because of the seriousness the president attaches to security and the rising security challenges that are happening in the North-West in particular”.

“During one of our briefings on security to the president, the issue of insecurity was seriously discussed as it affects the North-West in particular and we saw an emerging trend from Zuru Emirate”.

“And the president ordered us to move to Zuru and listen to the stakeholders and come up with a solution on how to bring lasting peace in Zuru Emirate and that’s why we are here.”

He further said that the security situation in the North-West, including North-Central, are issues that bordered on kidnapping, banditry and insurgency.”

Adamu urged every Nigerian to see the fight against insecurity as a collective responsibility.

He, therefore, underscored the need for people to continue to furnish the security agencies with genuine, reliable and intelligent information about suspicious elements in society.

He explained that “When you look at what happened in Zamfara, it used to be the epicenter of banditry, but when we tried to know the cause of the problem, we identified the cause and we said ok, let us go for solution.”

“What fueled insecurity in terms of banditry in Zamfara is what is fueling insecurity in Katsina and invariably the same here in Kebbi State.

“When the situation was so bad in Zamfara, we brought all the stakeholders and, in another development, we met with all the Governors from the North-West in Katsina. “A lot was discussed and we realized that Zamfara’s situation was caused by the problem of (“Yan Sa Kai”). This is because there was no control of command of the activities of (Yan Sa Kai.)

“When we moved to Katsina State we wanted to know what had been fueling the banditry and reprisal attacks. “Again, it was the activities of (Yan Sa Kai) because they organized themselves genuinely to protect their environment, their communities and their families but there was no command of control, so they went out of control and that is what is happening now in Kebbi State.”

Also, speaking the Director-General, State Security Services, Yusuf Magaji-Bichi, appealed to the people of Zuru Emirate to remain calm and peaceful. “He said no doubt that the people of Zuru are peace loving, accommodating and determined to achieve result.”

According to him, the result in this context is to have peace in Zuru Emirate. “If we extend this result to security agencies, I think we shall see light at the end of the tunnel, that means peace will reign in this Emirate again.

In his remarks, Governor Abubakar Atiku Bagudu, expressed dismay over the disruption of peace in Zuru Emirate by bandits and vigilante called ‘Yan Sakai.”

Bagudu noted that the emirate has rich tradition and cultural heritage as well as history of tolerance, multi-ethnic and multi-religious which contributed to the peaceful co-existence and unity of the country.

According to him, the only way to solve any problem is for the people to accept to live in peace and harmony with one another.

Bagudu said the state government would not condone acts capable of disrupting peace, warning that criminals would be punished.

The Governor commended the Police and other security agencies for their efforts in ensuring peace and security in the state.

However, the Emir of Zuru, Muhammad Sani-Sami II, called for investigations into suspected banditry and alleged extra-judicial killing in the area.

“We all know what spilled over to us from Zamfara State and this is what gave birth to the insecurity and consequence formation of vigilante.”

“We should understand ourselves and address the menace of insecurity in order to live together as one,” he added.

He alleged that the victims were killed by Dakarkari “Yan Sa kai” group this year.

“This dastardly act which started on April 29, 2020 continued unabated and no one is being arrested or being held accountable for these killings.

“The first murder took place in broad day light at the premises of the Technical College, Zuru, where eight Fulani people were killed.

“This trend continued in the communities of Danko, Maga, Ribah, Joli, Kadurga, Marafa, Kanya, Unashi and Ayyu, where 68 people were killed for no just cause other than being Fulani herders.

“This murderous gang is getting bolder and bolder by the day and if care is not taken the crises in these areas might snowball into a larger conflict.

“The silence and in-action of the traditional institution, the local and state government to deal with this lawlessness is capable of escalating insecurity in the North-West Region,” Kiruwa added.

He, however, said that the association had directed its Kebbi chapter to ensure that all its members affected in one way or the other should exercise restraint and allow the law to take its course.

“As a responsible and law-abiding association, we will not allow the situation to deteriorate because we always believe two wrongs do not make a right,” the President stated.

In his remark, the Chairman of (Yan Sa Kai,) Mr Mani Giwa, said that the Zuru people were known for their hospitality and peace-loving attributes.

“What is happening in Zuru today is that some people have taken up arms for the past three years, killing our farmers, destroying their farms and houses, raping, kidnapping and displacing them.

“The lack of media focus might be the reason why our voices were not heard until we resorted to self-defense,” he said.

Giwa, who described the emergence of the group as a “self-defense group”, said they only engage in arresting individuals that had direct or indirect links with criminal gangs.

“We are not fighting against MACBAN members, rather we are fighting criminals who cut across all tribes and cultures within and beyond Zuru emirate.”

“We have agreed to handover any arrested suspect to the appropriate authorities and we will monitor the court proceedings to ensure justice,” he said.

He thanked the state government, security agencies and all the traditional rulers for their untiring support and cooperation to (Yan Sa Kai).

The meeting was attended by members of National and State House of Assembly, representatives of security agencies, community and religious leaders as well as community development associations.