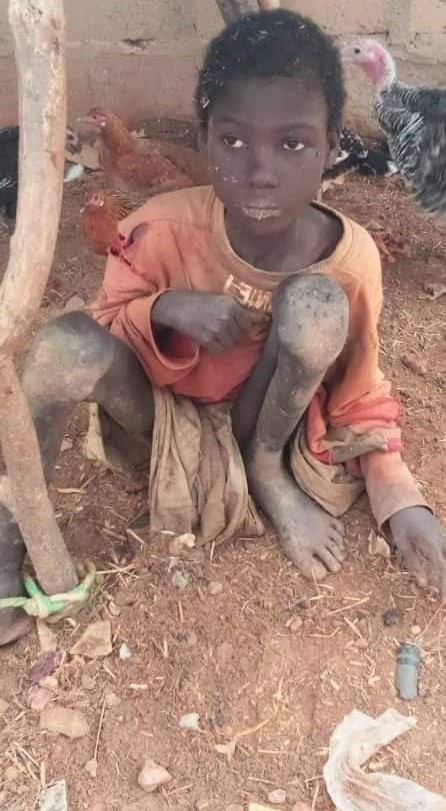 Jamilu was rescued by a NHRC and taken to Sir Yahaya Memorial hospital for medical treatment and his parents arrested for investigations.

The video and photos of the inhuman treatment meted on Jamilu Aliyu by his biological Father, and three step mothers after the death of his biological mother at Badaria area in Birnin kebbi the state capital has since gone viral on social media.

Stallion Times gathered that the said Jibril was held captive in a manger and feeds on animal feed and faeces for survival for over two years.

Meanwhile, a statement signed by the Special Adviser on New Media Aliyu Bandado stated that a high  delegation from the Kebbi state government, comprising the Chairman of Birnin Kebbi Local Government, Permanent Secretary Ministry For Women Affairs and social development, Hajiya Aishatu Mai Kurata, Special Adviser Women Affairs  Hajia Zara’u Wali and the Senior Special Assistant, Aishatu Ibrahim Magawata, have since  visited the boy at the hospital  and took over  the responsibility of the boys medica bills, upkeep and his Education.

The statement also reveals that the father of the boy Malam Aliyu Badariya and the two step mothers are already in the police custody for further investigations.

When contacted, the Police Public Relation Officer in the state, DSP Nafiu Abubakar, confirmed the incidence “is true, we are aware of the matter, the boys parent are with us and investigation is still on going.