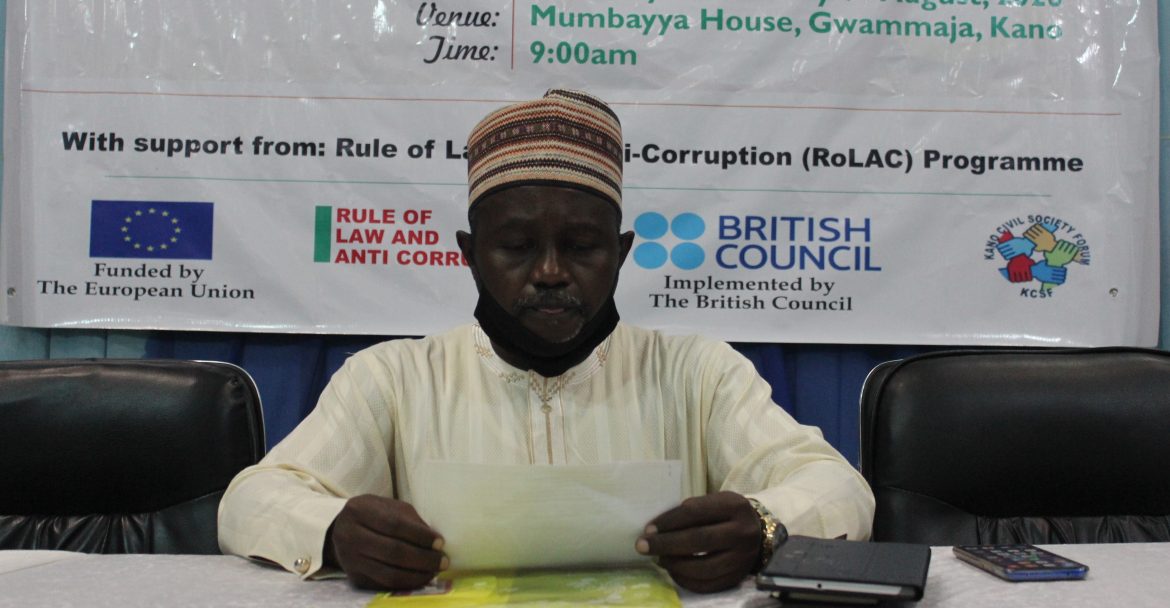 Kano Civil Society Forum (KCSF) and the State Ministry of Justice through the Attorney General are working for the release of funds to promote the effective implementation of Administration of Criminal Justice Act (ACJL) in Kano State.

This was made known by the state Attorney General, Bar Musa Abdullahi Lawan at a 2-day capacity building workshop organized by Kano civil society forum on advocacy for the implementation of ACJL, with support from the Rule of Law and Anti-Corruption (RoLAC) Program, implemented by British Council and Funded by European Union.

The reviewed 2020 Kano State Budget has an allocation of 36 million Naira for ACJL under the Sharia Court of Appeal with the code 22021018. It is for acquiring necessary equipment and sensitization.

The AG says already, the 36 million Naira budget line has been approved by the state government, though there is cash crunch due covid-19 at the moment, but we are making efforts to see to the release of the fund. “we may not have it completely released at the same time, but most definitely, it will be released in tranches for the effective implementation of the law”. Kano state will save millions of naira from it, he added.

On his part, Ibrahim Waiya, the President Kano State Civil Society Forum says the training is to equip civil society organizations with the necessary strategies of engaging with key stakeholders in advocating for the implementation of the law.

He added that “civil society organizations play an important role to see that the ACJA is ratified in Kano; it is important for them to also work tirelessly for its effective implementation for the benefit of protecting human rights in Kano”.

Dr. Nuhu Musa Idris of the department of Private and Commercial Law, Faculty of Law, Bayero University, Kano says at the end of the training, participants will be given a manual that will acquaint them with the different sections and provisions of ACJL, some of which includes Application of ACJL to all courts with criminal jurisdiction, Arrest, Type of Arrest, Mode of Arrest, Notification of Arrest, Search of a suspect, Arrest in lieu of persons, Treatment of arrested person, Taking inventory of property of arrested person and Detention.

Maimuna Umar Shariff is the Executive Director, Center for Gender Base Advocacy and a participant at the workshop.

She says the ACJL is one of the best things to happen in the dispensation of criminal cases in Kano State, but the Police and other arresting agencies need to be trained on all the sections and provisions of the new law to enable its full implementation.

The ACJL in Nigeria has increased the formal compliance to human rights issues in states where the federal Law is being ratified.

The advantage of the ACJL is that the interests of accused persons not yet convicted is protected while the old laws had provisions that discriminated against the rights of women. The ACJL is a huge breakthrough to the challenges of prolonged trials in federal and state courts.

The CPC is used for states across the north while the CPA for southern states of Nigeria.

These laws, have been in use for decades without reforms; lawyers and judges take advantage of its lapses to prolong trials resulting to congestion at Correction Centers.

The ACJL was introduced to ensure that the criminal justice system becomes more effective and efficient as well as responsive to the rights of the people, but it did not completely erode the provisions of the CPC and CPA.

Kano is one of the states that has ratified ACJA in 2019 called the “Administration of Criminal Justice in the courts of Kano State and for other related matters”.