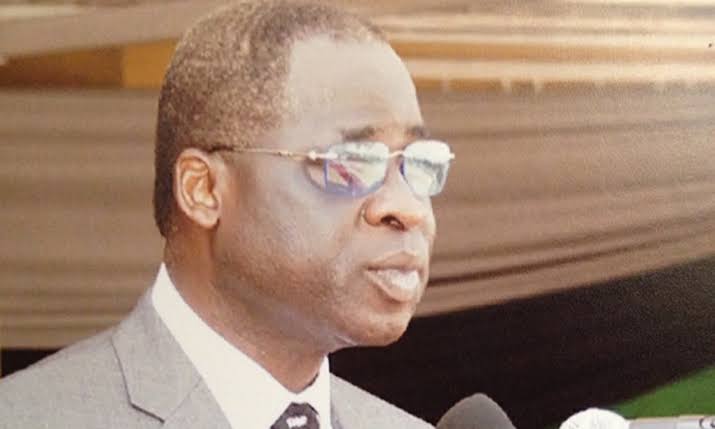 Mr. Afakriya Aduwa Gadzama mni OFR, like other retired spies is not allowed to write his memoirs for national security reasons. He can however voice his opinions with discretion. That is why when he recently took to the public domain it caught my full attention. One would have to carefully read through his intervention to understand the fundamental issue he is raising, simply that things are rapidly falling apart with renewed vigor across the North. The esteemed Gadzama is however not bombastic. He is deliberately polite in massaging PMB’s ego but unequivocal. This guy really knows his onions. While not holding brief for him, by speaking out he is deeply concerned and certainly worried. He was state director SSS in Kaduna, the epicenter of the North from 1993, if I can correctly recall to 1997 during those heady days of the June 12 struggle

Before I fully reproduce Mr. Gadzama’s informed opinion there is need to go down memory lane. The 3rd Armored Division was originally in Port Harcourt headed by then Brig. TY Danjuma who later as army chief relocated it to Jos. GMB then held sway during the Second Republic at the division which Brig. Benjamin Adekunle had handed over to Col. Olu Obasanjo in the concluding months of the Nigerian Civil War. Former Army chief, Lt Gen. Salihu Ibrahim was GMB’s de facto number two as Colonel General Staff. This was when the Maitasine aftermath in Kano played out in Bauchi, Yola and Maiduguri through a rear guard led by Bala Makaniki. Point being that Mr. President has a long-standing cognate experience in handling religiously inspired violence in that same area that Mr. Gadzama is predominantly writing about now more than 3 decades later.

When GMB was GOC in what is effectively the entire North East the current Army chief was just an ordinary officer cadet at NDA. That is why I am not among those fully locating the current blame in the NE or on insecurity in general on just the service chiefs. As far as I am concerned the buck stops on Mr. President’s table. He must be held accountable not only as C in C but his own words at Chatham House about “leading from the front”

Gadzama was appointed as Director of State Security Service by his Barewa College senior UMY in 2007. By 2010 he was thrown under the bus by GEJ. He was born on 22 November 1953 at Lassa in Askira/Uba Local Government Area of Borno State. He attended Barewa College from 1968–1972, then School of Basic studies of ABU Zaria, where he obtained his bachelor’s in Political Science by 1977. In 2001, Gadzama attended the Senior Executive Course at NIPSS. He joined the services of the now rested NSO in 1984 before IBB reinvented it as SSS. Over now to him unedited;

“The State Security Service recently had cause to alert on reported plans by some individuals and groups to orchestrate activities that would undermine the President Muhammadu Buhari administration. Such alerts were not the first in the life of the government and not surprising since the government had previously taken against such activities. What, however, makes the latest reports intriguing and threatening is that they are coming amid equally disturbing resurgence of activities of insurgents and many criminally minded subversive groups to ferment public disorder

It is instructive that the country in the last two months has also been besieged by renewed flare-ups of ethno-communal clashes in states like Taraba and Kaduna, increased insurgent attacks in Borno and Yobe States and violent attacks by armed bandits in Niger and Katsina States. In addition to these threats to security of immeasurable proportion, many faceless groups have been masterminding huge public disaffection by whipping up ethno-communal and religious sentiments in parts of the country, such as the video currently in circulation threatening attacks on communities in parts of the country.

Attacks by insurgents in Borno State and incessant bloodletting in Southern Kaduna also seem to suggest that these are the plans to trigger mayhem the State Security Service is talking about. The situation is further compounded by intermittent violent attacks by lawless groups in states such as Kogi. Equally indicative of the precarious security situation in the country is the cold-blooded murder of international aid workers in Borno State by the Boko Haram and their Islamic State West Africa Province affiliates recently.

The recent ambush on Borno State Governor’s convoy further exposes a frightening situation in the North East. Although many people have given the impression that the insurgency in the North East has been uprooted, the situation, as confirmed by Senator Mohammed Ali Ndume, the Senator representing Southern Borno, the Shehu of Borno and the Borno State Governor, Prof. Babagana Zulum, is far from over especially in most of the local government areas on the shores of the Lake Chad and in Central and Southern Borno.

We are however of the belief that with the ongoing counter terrorism efforts, the much-cherished legacy of President Muhammadu Buhari and the interest of the nation will better be served. The North East people will forever remember President Muhammadu Buhari’s achievements in halting the onslaught by the Boko Haram and the displacement and killings of hundreds of thousands of our people. Our people are however worried by the possibility of these achievements been reversed by the renewed activities of the deadly combination of burgeoning Boko Haram/ISWAP attacks and mayhem by ethnic militias. The ongoing counter terrorism efforts as many well-meaning Nigerians have pointed out requires revamping in all facets.

Suggestions have been made for revamping the security architecture by bringing on board fresh ideas and strategies. These suggestions should not be misconstrued to mean questioning the president’s right to decide on ideas being proposed. It is important to note that, all forms of war are won only by superior strategies and efforts.

It has to be pointed out that the situation the country has found itself in currently requires renewed efforts to stop the carnage in most parts of the country by insurgents, ethnic militias and mercenaries. It bears restating that the government loses its legitimacy in a situation where the lives of the citizens cannot be guaranteed and insecurity is pervasive. It should equally be noted that the president has repeatedly given directives and logistic support to decisively deal with the current security situation. What however is lacking is the failure of those charged with the tasks to put in their best to deal with the situation. Public support of the efforts of the security forces is also dwindling.

The time to take far reaching decisions on the current security situation in the country is now. The country will be saved being pushed over the hill by immediately stopping the insurgency attacks and needless bloodletting in parts of the country. All that are required to bring the current security challenges to an end are galvanizing the support of the populace and equipping the security forces with cutting edge fighting capabilities. The other deficiencies that need to be addressed include manpower and equipment shortage and sagging morale of the security forces.

As previously advised, an insurgency that has lasted a decade will require much more sustained and comprehensive counter and anti-insurgency efforts. No insurgency situation like the one we face has been successfully defeated only by the use of force. Equally important is the pursuit of a well-structured mop up of dangerous weapons believed to be in massive circulation in the country. It is well-known that towns and villages in Adamawa, Borno and Yobe States just like most parts of the country are awash with dangerous weapons.

It therefore follows that as long as the dangerous weapons in the hands of miscreants are not retrieved, criminal elements will continue to use them to unleash havoc on the populace. A disturbing dimension to the insurgency in the North East that should be pointed out are disclosures that the insurgents are believed to have acquired weapons with long range firing capabilities. The reported firing of such weapons into parts of Maiduguri days to the Sallah is very scary. The other disturbing dimension of the insurgency is the regrouping of the dispersed insurgents and intermittent attacks on communities in the North East.

These developments underscore the need for re-strategizing the ongoing counter terrorism efforts. Another very dangerous dimension of the current security threats that should attract immediate decisive action from the security forces is the reported incursions of the Boko Haram/Islamic State West Africa Province elements into the North Central and North Western geopolitical zones. These developments portend the terrorist incursions into the country is taking a more daring dimension.

These developments constitute very dangerous threats to President Muhammadu Buhari’s achievements in the last five years and national security. One should not fail to also mention that the other collateral complication to criminality in the northern parts of the country are the activities of rampaging herdsmen in the North Central and armed banditry in the North West.

The attacks are resulting in imminent food scarcity as farming in the last one year has been reduced by approximately forty percent. Worse still is the general state of siege that hangs over states in these zones. Something definitely needs to be done to arrest the drift into acute food scarcity in the country. The current security threats in the country are ominous as they constitute a huge distraction to government efforts to provide the country with well thought out infrastructural development which is only obtainable in a peaceful atmosphere.

As earlier pointed out, the determination of President Muhammadu Buhari to meet the yearnings of the people should not be distracted by poor handling of the current security challenges.”