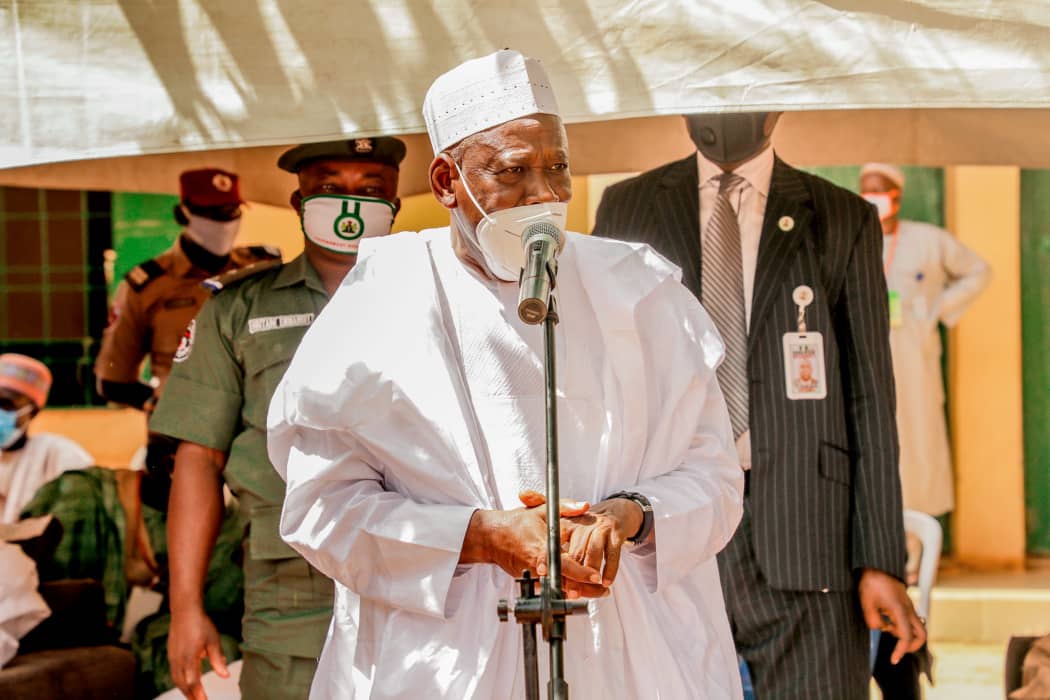 Governor Abdullahi Umar Ganduje OFR of Kano state has released 43 inmates from Kano Correctional homes as a mark for Eid-Kabir celebration, while calling on them to always be of sound character and contribute their share to state and national development.

According to the statement, Gov. Ganduje in his Sallah message urged all Muslims to be law abiding and continue praying for the security of the state and the country in general. While urging people to continue observing all protocols of Covid-19, he assured that with prayers everything is possible with the Almighty Allah.

“It is extremely important for people to pray much harder for national development and the security of our state and the country in general. We must continue observing all the protocols as enunciated by health workers. This way, we can overcome the pandemic,” he said.

He reminded how some states in the federation are being faced with the challenges of insecurity, insisting that, prayers are critically needed to do away with such insecurity situations.

The statement further said the Governor was at the Gorondutse Correctional Centre, where he released 43 inmates, one of the released inmates, called Jennifer Okafor, who was released just two months ago during Eid-Fitr festivity, extended the gratitude from Igbo leaders to Ganduje.

Ms. Jennifer was released few months ago, amongst 299 inmates, and was offered a job by the Governor, with the Kano State Road Traffic Agency (KAROTA).

“Your Excellency I am very grateful for what you did to me and to my family by extension. I really don’t have enough words to thank you Sir. After you released me, you also offered me a job with KAROTA. I am now an officer with this state traffic agency”, she appreciated.

Out of joy, she explained that, “even my people from the East are calling me to ask how it happened. I told them I really don’t know. That it is the work of the Almighty. My name is now Jennifer Abdullahi Ganduje.” The governor is truly Aguna Echemba I of Igbo land. ” My people said you deserve the name of Aguna Echemba I given to you by our leaders from the East. They asked me to extend their sincere gratitude to you Sir,” she concludes.

Those released from the Correctional Center were given the sum of Five Thousand Naira each as transport fare.

In his remarks, Governor Ganduje said “When we release people, we release them without taking into consideration their religious background, ethnicity, age or sex differences. We believe humanity as a whole should always be assisted.”

Explaining that, when they were released, they were advised to be and remain people with sound character. “Mrs Jennifer Okafor is an example of those released from this and similar Correctional Centers. She is now holding on tight to her new job with the State Traffic Agency, KAROTA. This shows that we are achieving something,” he appreciated.

Comptroller of Kano Correctional Centers Magaji Ahmed Abdullahi commended the governor for the good work and gesture done to the released inmates.

I really appreciate what Governor Ganduje did.it is a very commendable effort and wise innittiation. my Allah continue to guide you and protect you maigirma governor