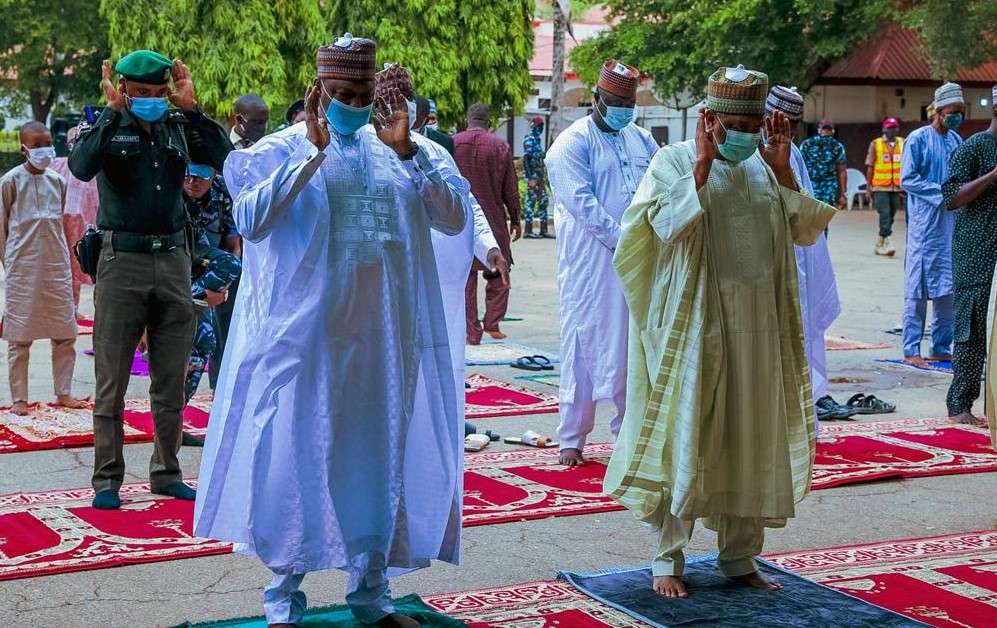 Kebbi State Governor, Senator Abubakar Atiku Bagudu, Friday, in Birnin Kebbi, extolled the sterling and tangible achievements of President Muhammadu Buhari, expressing delight that, Nigeria is now better off with Buhari in the saddle of her leadership.

Bagudu also lauded Buhari’s tremendous confidence in an illustrious son of the state, Abubakar Malami, SAN, who is the Minister of Justice and Attorney General of the Federation for his effort in leading the arduous fight against corruption.

Governor Bagudu flanked by the Minister for Justice and Attorney General of the Federation, Abubakar Malami (SAN) made the commendation in his Sallah message to the Muslims, shortly after the two rakaats prayer offered at Government House, Birnin Kebbi.

Bagudu noted that, Buhari had successfully delivered on all the three cardinal promises which he promised in his 2015 campaign. He said: ” On security, there are increasing efforts by the security agencies to bolster peace and security in the nation.

“Currently, there is no territory of the country that is under the control of insurgents like he inherited. Kebbi state has also remained one of the most peaceful states, sequel to these glaring commendable efforts by the president.”

Gov Bagudu also averred that, Buhari succeeded in turning around the economy of the country, like he pledged. “In this direction, Kebbi State had received colossal attention and support, and it has responded to the clarion call. Kebbi now contributes to national self-sufficiency in food production,” the Kebbi governor, added.

In the same vein, Gov Bagudu recalled that, only two months ago, a N20 billion Tomatoes Processing Company began operations in Ngaski Local Government of the state.

According to him, while many of such firms were springing up, Kebbi state is now the first forte of call by Nigerians who want to buy rice.

The governor also urged people of the state to abide strictly to all safety protocols to avoid the spread of COVID-19 in the society during and after Sallah period.

On his part, Attorney-General of the Federation and Minister of Justice, Abubakar Malami, SAN called on Muslims to fervently continue praying for a more peaceful and prosperous Nigeria.

The Minister who joined governor Abubakar Atiku Bagudu in observing the 2 Eid rakaats at Government House, Birnin Kebbi also felicitate with Muslim faithful on the occasion of this year’s Eid-el-Adha.

According to the Minister, the period of Eid of sacrifices comes with numerous lessons including sincerity, honesty, commitment, sacrifice, selflessness,

introspection and empathy, among others.

Malami called for enhanced mutual understanding, peaceful co-existence, good neighborliness amongst people of the state and urged Muslims as they celebrate the Eid to continue to be law-abiding and have sober reflection.

He described the Eid prayer as a symbol of unity among the Muslims while also calling on all Muslims to pray fervently for the end of the dreaded Coronavirus pandemic.