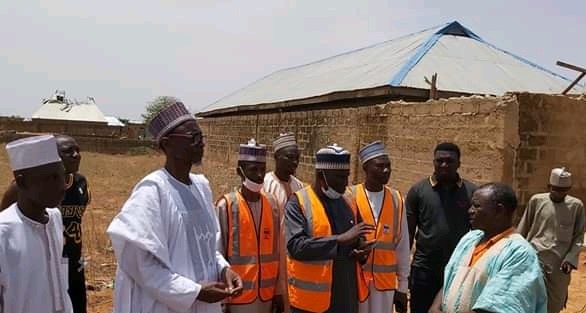 The Kebbi State Emergency Management Agency (KSEMA) has distributed relief materials to victims of rainstorm and Internally Displaced Person IDPs​ as a result of Banditry in some parts of the state.

The Executive Chairman of the Agency, Alhaji Sani Dododo,​ says “The agency will not relent in its efforts to provide relifes​ to victims of diserster in the state.
​ He stated this while​ distributing​ materials to the affected storm victims in Birnin Kebbi local government area.

In a related development Dododo said​ that the agency had recently distributed some relief materials to 900 IDPs in Danko/Wasagu and Zuru LGAs.

He explained that​ the IDPs lost their parents and husbands as well as livestock in Dabai,​ ​ Mairere and Bena, in Danko/Wasagu LGA to banditry. Adding that SEMA will also​ sponsor their children to schools from primary to secondary level as a relief in order to cushion the effects of loses,” ​ he said.

Dododo also said that the Seasonal Rainfall Prediction (SRP) by the Nigerian Meteorological Agency (NIMET) had predicted that some parts of the state and the country might experience​ heavy rainfall this year, and such might result into flooding and other social disequilibrium.
He therefore​ appealed to the residents in the riverine areas to relocate to the upland, and the general public to ensure the evacuation of wastes from waterways and drains within and around their environments.

“We are already collaborating with all the stakeholders in the state to sensitise the public to take precautionary measures again all​ disasters​ ​ in both the rural and the urban areas.

Speaking Earlier, ​ the Chairman of Birnin Kebbi Local Government Council, Alhaji Aminu Magatakarda, commended the Agency for the gesture while urging the victims to accept what happened as an act of God he then prays against​ future occurrence.

One of the victims, ​ who speaks on behalf of other victim Muhammad Musa thanked the state government for providing the relief materials to them.

He also called on the members of the state House of Assembly, Non-Governmental Organisations and well-meaning Nigerians to assist them to enable them resettle down with their family.