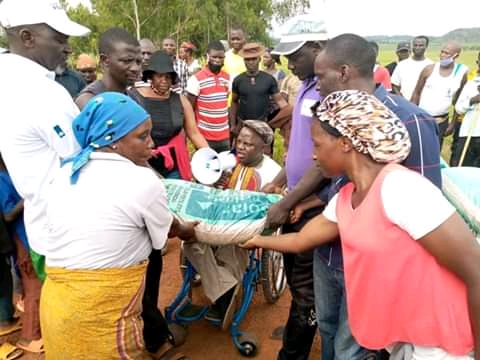 Farming is considered as the major source of living after tin ore mining on the Plateau. The raining season is here; for famers in Miango Bassa Local Government Area, they have a few challenges with regards to farming inputs like fertilizers and seedlings.

Beautiful Gate Handicapped People Centre Jos, Plateau State, an industry that produces Wheelchairs and Mobility for people with disability has donated fertilizers to a group of farmers consisting mostly of youths in Kpachudu Village, Miango Bassa to ameliorate their situation.

The center presented 30 bags of fertilizers to over 2,000 farmers at a farmland in Kpachudu village for this year’s faming season to improve farm yields.

Speaking at the occasion, Chief Ayuba Burki Gufwan, the Executive Director, Beautiful Gate Handicapped People Centre lauded the unity of purpose and communal efforts being exhibited by the Irigwe tribe for their communal farming model and called on other ethnic groups to borrow a leaf from their model; an all year farming activity of normal faming during raining season and irrigation in dry season to grow crops, maintain landscape, and revegetate disturbed soils during low or no rainfall.

He described their model as commendable and worthy of emulation to discourage any form of land grabbing. He admonished youths in the area to take education seriously, saying “it is the best form of self-development”.

According to him ‘’the center distributed food palliatives to people with disabilities in the local governments but realized that fertilizer is best considering the enthusiasm of the people to farm and prayed God to bless their efforts. He said he is sure the assistance will boost food production and reduce hunger and poverty”.

Prof. Danny McCain, a Member of the Board of Trustees of the Centre said though Beautiful Gates core mandate is alleviating the plights of people living with disabilities but it also reaches out to areas which he described as handicapped communities.

He charged them to focus on the future with greater hope for their families.

The Chairman Miango Youth Development Association, Nuhu Nkeli expressed delight and appreciated the centre for identifying and assisting them with the most important farm input (fertilizers) and said it will help improve productivity and bumper harvest.

Nkeli said the centre has done a lot in diverse ways and prayed God to open more doors so they can reach out and impact more communities within and outside the state with humanitarian gestures.

The representative of the District Head of Miango, Chief Isaiah Nkie lauded the center for their humanitarian intervention and urged other organizations to emulate the kind gesture.

Chief Ayuba Burki, the Executive Director, Beautiful Gate Handicapped People Centre was conferred with the titled of “Kwe-Tingwe” meaning “a legend that have fought well” for his enormous contributions to the people of Kpachudu Village, Miango Bassa Local Government Area of Plateau State by the representative of the District Head of Miango, Chief Isaiah Nkie.