Gender Based Violence: Dr. Zainab Bagudu Calls for a Step-Up Advocacy at Grassroots 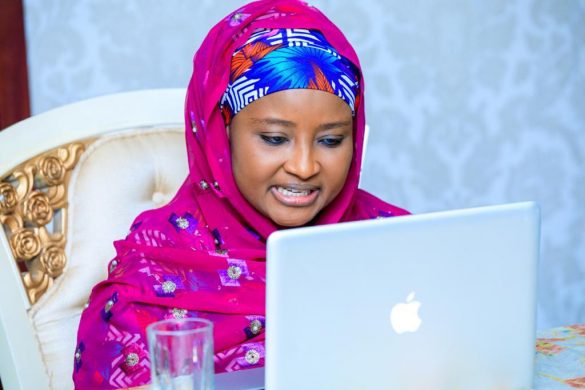 Wife of Kebbi State Governor, Dr. Zainab Shinkafi Bagudu, has called for a step-up advocacy to effectively tackle gender-based violence at the grassroots level. According to a statement signed by the Special Adviser to Kebbi State Governor on Media, Malam Yahaya Sarki and made available to news men in Birnin Kebbi stated that Dr. Bagudu made the appeal at a webinar Digital Summit organized by a Non-Governmental Organization (NGO), Movement Against Rape and Sexual Violence (MARS-V).

She explained that grassroots advocacy needed to be stepped-up in order to yield positive results.
Dr. Zainab urged government at all levels and Civil Society Organizations (CSOs) in Nigeria to step-up efforts toward finding lasting solution to the menace of gender-based violence.

According to her, it is essential to note that the whole issue is about people’s culture.
“There is a general culture of silence among people at the grassroots. We need to constantly engage the rural gatekeepers at the grassroots; the religious and traditional rulers, because they are major facilitators to domesticating and implementing laws against sexual violence”.

“Secondly, in order to change the mindset that Female Genital Mutilation is wrong and people are supposed not to mutilate a girl-child, we have to engage them very well. Although, we had tried in recent times, but there is the need to put in more efforts because there are major obstacles that we have faced”.

“Even those that have little understanding have their own belief and interpretation of verses of the holy Qur’an, so we are finding ways of getting that mindset changed.”

The Governor’s wife also bared her mind on the reformed Penal Code Laws for Northern States compared to what was obtainable in the Southern part of the country.

The VAPP Act, according to her, is an improvement of the pre-existing laws, which considered a lot of things that the other laws did not treat, aside from the punishment. “It is also imperative that Northern States that practice the Penal Code improves on it, so that they will be able to adapt the VAPP Act and so many other issues”.

She noted that recently, Kebbi State Governor presented the last bill to the state House of Assembly, alongside the Child-Rights and the VAPP Act for hearing and passage into law. hoping that the bills will see the light of the day, since the reformed Penal Code has already been adapted in the state.”

Zainab commended the concerted efforts by the Civil Societies Organizations and advocates, including the development partners and agencies like the National Agency for the Prohibition of Trafficking in Persons (NAPTIP), when the current outcry on gender-based violence began.

“Although, Nigeria is a large country, but there is the need to categorize it into zones, so that there will be a way in which everybody can have a voice to speak to a peculiar need of their areas.”

The webinar which was entitled: “Ending the Culture of Impunity in Cases of Rape and Gender Based Violence,” was anchored by renowned TV Host, Vimbai Mutinhiri-Ekpeyong.

Governor Nasir El-Rufa’i of Kaduna State was the Guest Speaker, while his wife Aisha El-Rufai, and UNFPA Ambassador on Fistula and the wife of Niger State Governor, Amina Abubakar Sani Bello, were guest speakers, among others.